Teenage girls activists are bravely organizing worldwide to address specific issues they face in their contexts. They are questioning power dynamics, sexism and ageism within and outside social justice movements, all while advocating for meaningful representation and inclusive decision-making.

A demonstration led by girls during an advocacy training, in which girls came up with key messages that they wanted to talk about. Picture credit: MAD Sisters, Kenya

At FRIDA, we believe in the transforming power of teenage girl activists to fully participate in the movement. Since the very first grantmaking cycle, FRIDA has been funding and supporting young feminist groups led by teenage girls or centred on teenage girls. This includes cis girls, trans*, intersex and gender non-conforming girls. As part of our commitment to meaningful teenage girl engagement, we have a Teenage Girl strategy that strives to go further by including teenage girls’ expertise at the core of our governance. This strategy is continuously informing our participatory grantmaking, capacity development opportunities, advocacy and media strategies.

We truly believe that girls, women, trans and intersex youth are the experts of their own reality. That is why we decentralize decision making power over resources and practice participatory grantmaking. Through this movement-driven process, overall we have supported about 95 girl-led and girl – centered groups in Asia & Pacific, Sub – Saharan Africa, Middle East and North Africa, Latin America & Carribean, Central, Eastern Europe, Caucasus, Central and North Asia since the first grantmaking cycle. This does not include groups who have chosen to remain anonymous for various reasons.

We acknowledge the intersectionality of issues that girls face, address and recognize that is not siloed. At present, FRIDA is funding 78 young feminist groups led by adolescent girls or girl-focused out of 198 current grantee partners. Main thematics these groups work on include: Gender based violence; Sexual Reproductive Health and Rights; Early + forced marriage; Female Genital Mutilation or Female Gender Cutting; STEM; Post Conflict, HIV/AIDS .  Their work intersects in many ways as these issues overlap in different contexts.

We recognize that girl organizing takes different shapes and is not homogenous. Some of the key strategies that groups led or centered by girls use are art for change, awareness  raising, knowledge building, advocacy, legal aid, community and leadership building, psychological aid and using online and digital media.

FRIDA recognizes that girls need more funding! We have built the following structures and opportunities specifically for girl advisors and grantee partners. Funding is not the only need of girls, they can also be supported in other vital ways:

We prioritize teenage girls participation in key decision making processes at FRIDA and beyond. FRIDA had its first Girl advisor join the Advisory Committee in 2015. In 2017, we expanded FRIDA Advisory Committee by inviting 5 more girl advisors to bring their experience and region specific expertise. The fact that FRIDA’s Advisory Committee has a multi-generational structure ensures representation of Girl Advisors and that they have the same responsibilities and equal decision-making power with a special focus on FRIDA’s Teenage Girl Strategy priorities, particularly around outreach, advocacy and networking.

Here are two girl advisors who share more on what it means to be a FRIDA Girl Advisor:

Anu: For the past two years I’ve spent at FRIDA, I’ve been able to work both locally and globally as an activist. Our activism is online and we participate via conference calls which, in my opinion, sets FRIDA apart as a modern, flexible organization, in comparison to the others that I’m familiar with. I’ve had many opportunities to have cross-cultural dialogues about the issues I face locally, where I find connecting with other girl advisors to be more than helpful since some of us are more well-versed in specific areas more than the other. These resources FRIDA provided me with have had an astounding effect on my work as a volunteer and as a person. ‘I feel like I have grown into the activist I wanted to become with FRIDA’s help.

Ludmila: Being a FRIDA advisor is a great experience and opportunity to put my feminist activism into practice from another place, getting to know not only other realities but also other cultures and generating bonds with partners from very different geographical places. It is very interesting to be able to generate dialogues, share experiences and think about strategies or feminist studies as a whole. It allows not only one individual to grow, but also to learn how to work collectively and organize online, sometimes also in face-to-face meetings. 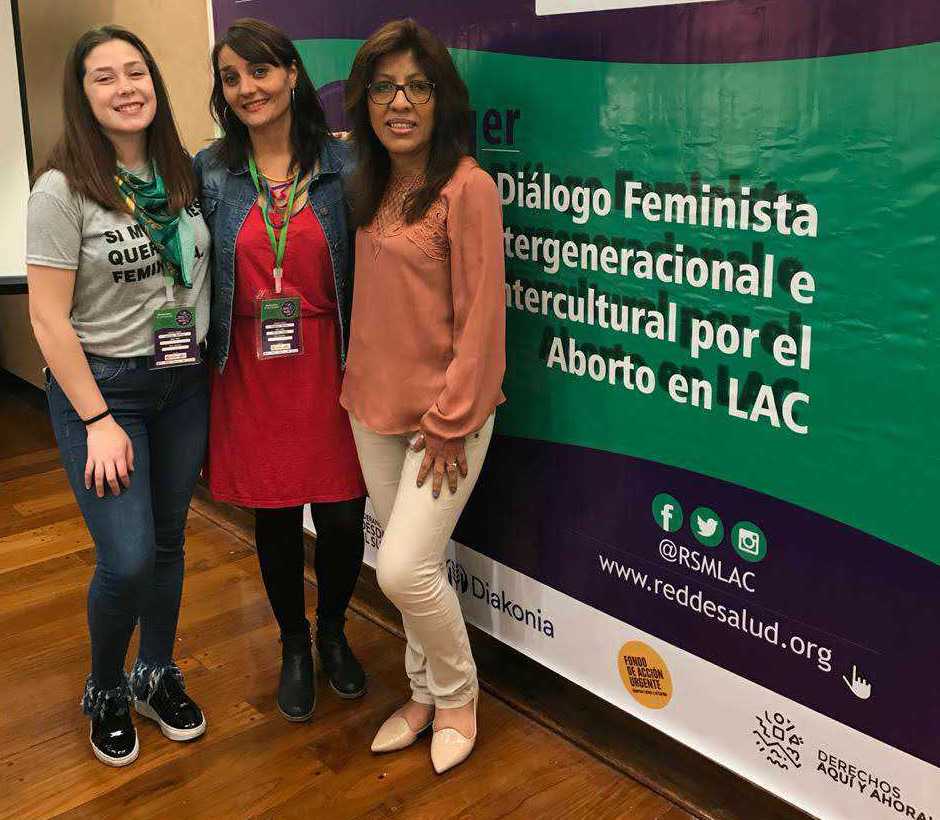 Ludmila (19) [extreme left] girl advisor from Argentina participated in the first intergenerational and intercultutral dialogue about abortion rights in Latin America and the Caribbean organized by the Women’s Health Network in the region. She was part of a crucial conversation on promoting sexual rights, with a special focus on access to safe abortions.

FRIDA’s Girl Advisor from Mozambique, Khensani (20), participated in the Global Girls Summit event organized by Plan International and gave a speech about the urgency to fund grassroots feminist girl led and centered organizing in front of thousands of people.

FRIDA prioritizes girl participation when it comes to building knowledge and advocacy. On International Day of the Girl (October 11) last year, FRIDA and MamaCash joined hands to launch “Girls to the Front”, a one-of-its kind participatory research report that studied global girl-led organizing. It was unique because of its girl researchers’ team. Zhanna, who was 17 at the time of the research study says: “I don’t think I know research studies where girls are involved in interviewing and being co-researchers, and this was something new. Working on this research,  showed me how girls themselves interview each other and gain new skills, which I am using in my journalistic work now.” Ludmilla adds that she admires how FRIDA guarantees the participation of girl advisors through different activities within the fund, including but not limited to accompaniment program, attending meetings around strategic planning and research work.

FRIDA takes risks and funds emerging, brave feminist activism led by girls. We fund underrepresented issues that are often considered “too radical” or “not eligible”. We invite philanthropy, funders, foundations and anyone who is passionate about girls rights to be a true advocate and show support in the following ways: