FRIDA’s 8th call for applications opens on March 15, 2022 and closes on May 4, 2022. During this time, we invite you to send in your applications online through our grantmaking platform. FRIDA provides core, flexible funding for emerging grassroots groups led by young girl, women, trans and/or intersex feminists working in alignment with FRIDA’s principles. Groups can apply for a grant of USD 6,000 which can be used over a period of 12 months for general support and/or projects and is open to renewal.

WHO SHOULD CONSIDER APPLYING?

You should consider applying for FRIDA funds if: 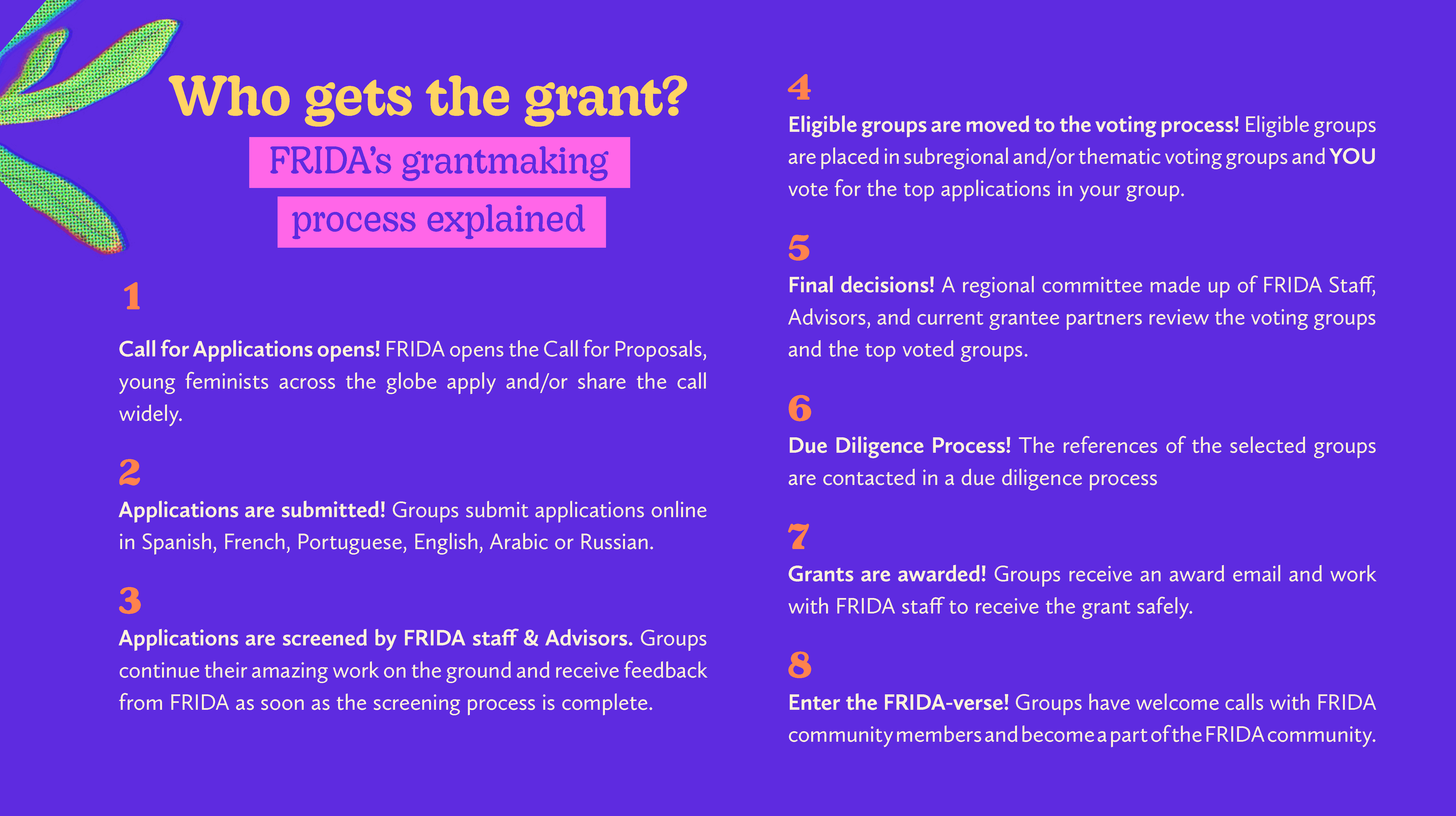 Ready to learn more and apply? ​

We have created Application packs in 6 languages that details more about eligibility criteria, what we seek to prioritize during this grant cycle, important dates and timeline and accessibility notes. Please see more details below:

Please note that the platform has had updates in the last year and you may notice some differences in the questions on the forms or in the design, but how to access and apply remain very similar.

You can access the Application Form in .pdf here if you would like to check the questions before applying. Please note that all applications must be submitted on our grantmaking platform. We will NOT accept applications submitted via email.

To support groups applying from areas with lower bandwidth of WiFi connectivity, we have created a low resolution, summarized version of this application pack available in English, Spanish, French, Portuguese, Arabic and Russian. Please click on each language to access it, if that is the case for your geographical location.

If you have any further questions about anything, we recommend that you read some frequently asked questions (FAQs) here. It is also available in French, Spanish, Russian, Portuguese, Arabic. If your question is not answered there, you can contact us at applications@youngfeministfund.org 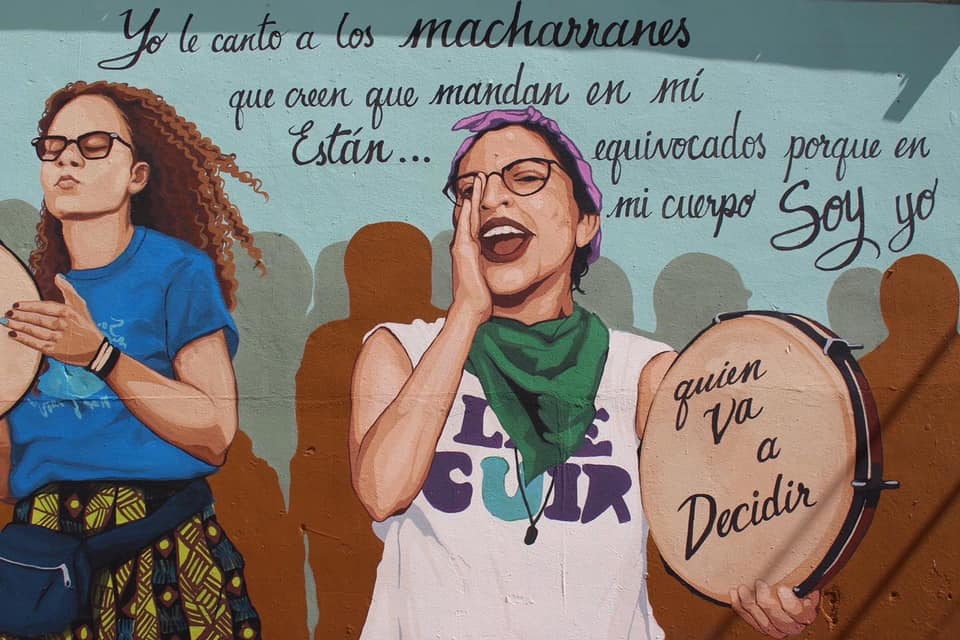 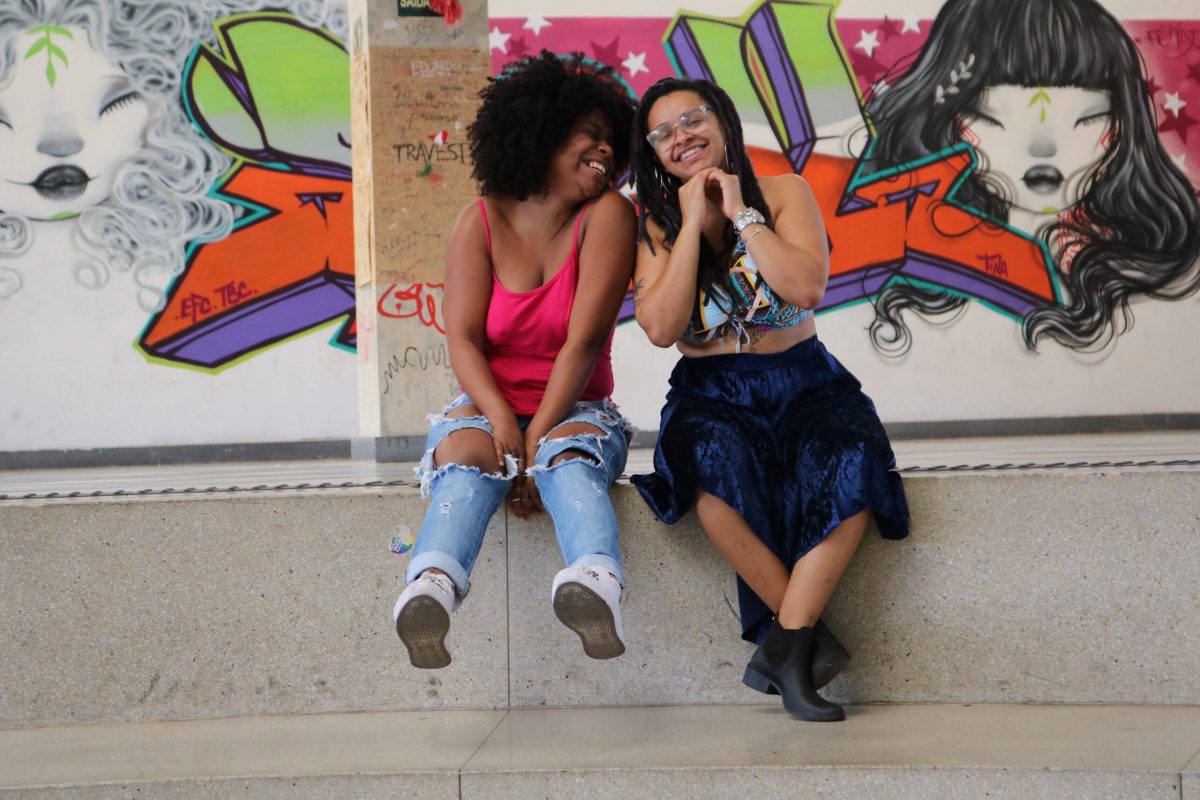 1. What does FRIDA mean by ‘feminism’ and ‘young feminism’?

FRIDA uses the term ‘feminist’ broadly to refer to individuals and collectives working within women’s movements or in other social movements to promote and work towards the safety, equality, justice, rights and dignity of girls, women and other marginalized groups. Based on the understanding that fundamental discrimination occurs within patriarchal systems of domination in all societies, young feminists are determined to challenge, address and change the root causes of these existing inequalities, rights violations and injustice. We recognize that there are multiple feminisms and foster opportunities for expressing those principles in our work. FRIDA emphasizes feminist principles throughout all of its work. These principles include: non-hierarchy, collectivity, participation, diversity, and inclusion. We define young feminist activists as individuals from across the gender spectrum committed to advancing gender equality and women’s rights through explicitly feminist means. FRIDA focuses on activism led by feminists under 30 years of age.

2. What does the term ‘trans and intersex youth’ refer to?

FRIDA strives to decolonise the way we understand and talk about gender identities and bodies, and the terminology we use when describing folks and experiences. For the sake of simplicity, we use the word trans in our communications, but recognise that behind it there are multiple, complex and beautiful ways of living gender. The term trans is not one that FRIDA assigns to people, but rather one that is self assigned. FRIDA fully believes in autonomy and self determination as essential feminist values.

Intersex is a term used to describe a wide range of natural bodily variations. Intersex youth refers to young individuals born with sex characteristics (including genitals, gonads and chromosome patterns) that do not fit typical binary notions of male or female bodies. In some cases, intersex traits are visible at birth while in others, they are not apparent until puberty. Some chromosomal intersex variations may not be physically apparent at all.

FRIDA grants are dedicated to organizations/groups that are led by girls, young women and/or trans and intersex youth aged 30 and under. FRIDA recognizes that there are limited funding opportunities for young feminist activists under the age of 30 so FRIDA seeks to fill this gap. If your group is led by young women or trans and intersex youth up to 35 years of age you can still apply if the majority (70% or more) of your organization’s members is 30 or under. However, priority will be given to groups led by girls, young women, trans and/or intersex youth aged 30 and under.

FRIDA accepts that the age range covered includes young people who in many contexts are already considered ‘adults’ (mothers, married, income earners, voters, etc.) and that there is an inadvertent cultural and class bias in conceptions of what makes a “young” activist. However, FRIDA is committed to supporting groups that demonstrate a solid commitment to feminist activism and movement building while doing our best not to reinforce an artificial concept of ‘youth’ as an identity.

4. Can we have people older than 30 in our organization?

5. We are a group of/led by girls, trans and intersex teenagers. Can my group apply?

6. Can we apply if we are a young cis men led feminist group?

7. Are we eligible if we have cis men as members of our group?

FRIDA is a fund that is dedicated to support small, emerging grassroots groups, networks, or collectives with little or no access to funding from larger donors, so the priority will be given to groups that have an overall budget less than 50,000USD.

9. We applied for a FRIDA grant previously and did not receive the grant. Can we apply again?

Yes! We strongly encourage you to apply again!

FRIDA only accepts application submitted by young feminist organizations or groups or collectives.

11. Can we apply for an individual research/scholarship/travel grant?

At this moment FRIDA does not fund individual/academic research, scholarships and travel grants. If your group wants to submit a proposal for research such as monitoring, analyzing and responding to issues in your community, and to use it directly for advocacy, or for sharing knowledge and recording/preserving lived  stories, or other reasons that you identify as vital to your activism, you are eligible to apply. FRIDA will support activist driven research with a collective, independent process, not connected to institutions.

It is not necessary to have 5 years of experience in order to apply for a FRIDA grant. On the contrary, FRIDA supports newly formed organizations and groups founded in the period between 2015 and 2022.

13. Is my country eligible?

14. Do we need to be a legally registered organization in our country to apply?

No. Your young feminist group/organization does not need to be legally registered in order to be eligible to apply. In many cases, newly established young feminist groups struggle to become registered and in others, groups make a political decision to not register themselves. FRIDA is open and committed to supporting both unregistered groups as well as those that are legally registered as non-government organizations in their countries.

15. Do we need to submit a detailed budget proposal?

At this stage of the application process, it is not necessary to submit a detailed budget, only an overview of how you plan to use the grant.

16. In what languages can we apply?

You can apply in one of the following languages: Spanish, French, Arabic, English, Portuguese or Russian.

No. A group can apply only once, with only one grant application. Groups who applied in previous grant cycles are welcome to apply again!

18. What is the amount and length of FRIDA grant?

After the participatory grantmaking process, selected groups are awarded a grant of $6,000 USD. Grant funding can be used over a period of one year. At the end of the year, FRIDA grantee partners are asked to submit a report and are invited to apply for a renewal of their grant.

19. What does FRIDA mean by flexible funding?

FRIDA grants may be used by groups based on their collectively identified needs. Grants may be used for project support eg: to plan and host workshops or trainings, to fund transport, food and other relevant materials for group activities and may also be used for general support eg: to pay staff salaries/stipends, rent of an office space or relevant utilities. Groups who receive the FRIDA grant will receive more information about the ways the grant can be used in their welcome package.

20. We can’t access online form, can I send my proposal via email?

We strongly recommend that you apply via FRIDA’s online grantmaking platform. If for any reason you are not able to access the platform, please email us at proposals@youngfeministfund.org

21. What does applicants voting mean? Who makes the final decision?

Applicants vote for applications that they think should be supported in their region.

One of the things that makes FRIDA’s grantmaking different is your participation as an applicant, which is central to the decision around which groups will receive the final grants. FRIDA believes that young feminists are experts on feminist and human rights issues in their regions and within the thematics they work on. So, FRIDA believes that an important decision like where the funding should go is one that should be made by those who will eventually receive it. At this stage, all eligible applications are divided into voting groups within FRIDA’s 6 regions.

No, you can’t vote for your group. FRIDA’s voting is a transparent process and groups that vote for themselves will not be accepted.

23. What is the deadline to submit my proposal?