In today’s day and age of social media, communication and raising awareness has taken a new meaning for the millennial generation. For young feminist groups, particularly those who have access to decent Internet, social media is a vital component of their activism. RainboW-o-Men, a FRIDA grantee partner in Bhutan, is a great example of how using social media technology can raise awareness and improve gender sensitisation.

Operational as a group since 2017, RainboW-o-Men envisions a community where intersectional feminism is the common language and sexual and reproductive health and rights (SRHR) of young people, especially young women and transwomen, is realized.

In January this year, the group launched their Instagram page “Feminism in Bhutan” with the idea of using the online space to sensitize and campaign on key topics. These include feminism, safe abortion, comprehensive sexuality education, gender based violence, people with disability and sexuality, toxic masculinity, self-care, self-love and more. In a nutshell, all those topics that are hardly talked or discussed seriously in Bhutanese society.

Using the power and reach of Instagram, the group has been able to reach a wider audience. “We are currently running in the capital, Thimphu City, and now have people from all over the country following us. They have expressed interest in learning more about feminism+ online and join us for in-person programs,” they say. In March, two months after launching the Insta page, rainboW-o-Men brought some of the interested followers together to observe International Women’s Day and organized its first-ever sensitization program. 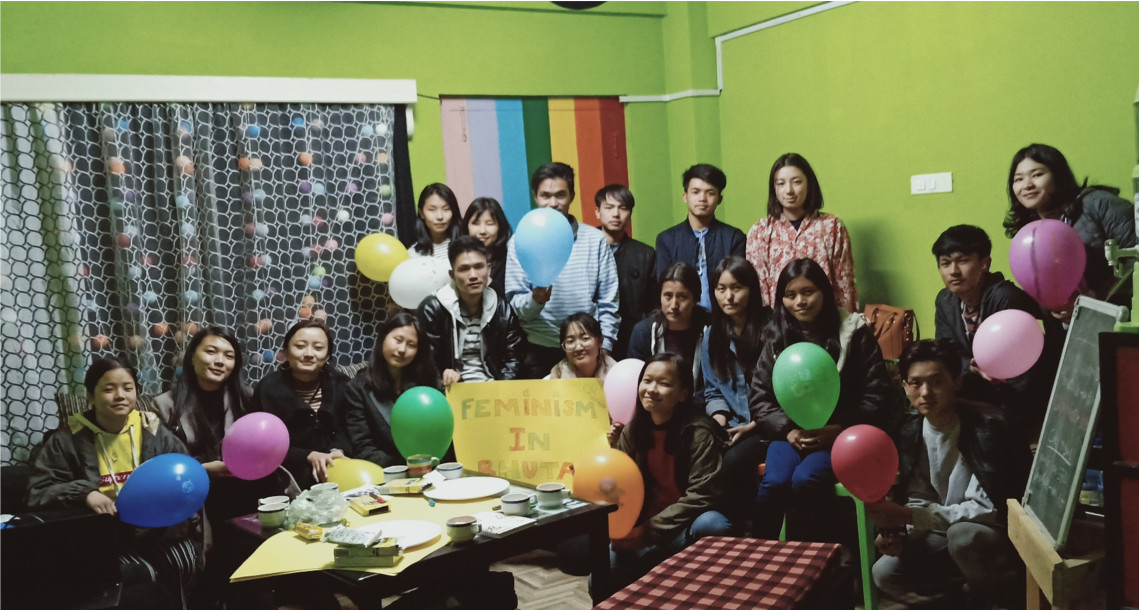 Nineteen participants who were part of rainboW-o-Men’s gender sensitisation program. All participants discovered the group through Instagram and expressed an interest to meet and discuss everyday feminism and more. Pic credit: rainboW-o-Men, Bhutan

RainboW-o-Men are bravely stepping up to challenge sexist, homophobic and discriminatory ideas in Bhutanese society at a time of change. Just this week, the lower house of parliament in Bhutan voted to decriminalise homosexuality, inching a step closer to fully removing this outdated law. In recent news, equal marriage has been legalised in Taiwan; Botswana now fully decriminalises homosexuality. There is a wind of change around the world, and young feminist collectives like RainboW-o-Men are building this resistance every day.

The larger goal for RainboW-o-Men remains to build, strengthen and sustain the feminist movement in a country that is still waking up to the idea of feminism and gender equality. The work they are doing is vital in shaping cultural conversations at a national level. FRIDA is proud to be supporting them in doing this and their activism reaffirms our belief that young feminists best understand and create their activist strategies.

Consider giving to FRIDA to enable groups like rainboW-o-Men to realise their feminist dreams. We need feminism now, more than ever.

Background: FRIDA | The Young Feminist Fund is a young feminist-led initiative that funds and…