This article was originally published on Women’s Media Center’s The FBomb, as part of the Young Feminist Media Fellowship between FRIDA and The Fbomb. This article is written by Ngozi Cole, one of the four fellows who was selected as part of the fellowship. A pilot project launched in 2018, it is an attempt to counter dominant narratives that provide little to no space to achievements and accomplishments of young feminist organizers, this fellowship seeks to give an opportunity to young feminist storytellers to themselves tell the story of young feminist trends around them.

Although attention surrounding the #MeToo campaign has mostly centered on the Western world, especially Western celebrities, activists are pushing conversations around rape and sexual consent in societies around the world in which they are considered taboos.  In Ghana, young feminists and activists are breaking the silence and long-held cultural beliefs about women’s bodies and sexuality in their own way, questioning long-held beliefs around women’s bodies and sexuality.

By creatively merging theater, dialogue, and activism in Ghana, Drama Queens, a nonprofit feminist organization, is challenging patriarchal norms and ideas and changing the damaging narratives about rape culture and sexuality that are deeply entrenched in many African societies. Founded in 2016 by Ghanaian writer and actress Nana Akosua Hanson, Drama Queens uses a number of tools and platforms — including social media, filmmaking, and theater — to educate its audiences about topics relevant to their mission, such as LGBTQ rights, sex and sexuality, rape and consent. They have also created physical and digital safe spaces for their audiences, which encourage people from all walks of life to engage in dialogue, breaking stereotypes and barriers, and building understanding and inclusiveness by doing so.

#Let’sTalkConsent, a hashtag campaign as well as a series of workshops that highlight the importance of consent and awareness about rape in Ghana, illustrates Drama Queens’ work to remove deeply embedded cultural norms. The hashtag has enabled over 1,000 Ghanaians to talk openly about rape culture and consent on social media over the past two years. The workshops, held at various high schools and colleges in Ghana, have taught students about sex education and encouraged open conversations surrounding sexuality and LGBTQ issues.

During a #LetsTalkConsent workshop at Ashesi University, for example, students were asked to think about what a college with consent culture looks like. Students translated their thoughts on this topic onto posters, which they shared across their campus. The workshop was so successful that Drama Queens created a training manual for sex education based on consent culture for the university, creating real cultural and structural change at the same time. Millicent Adjei, Ashesi University’s associate director of diversity and international programs, said that they learned a great amount from the students during the walkthrough sessions, including that sexual misconduct is a public safety issue, and that it should be dealt with through policies and cultural attitude shifts. According to Akosua Hanson, “This collaboration was a big win for us because, for the first time since we started running LTC, a university has mainstreamed our consent-based workshops in their orientation program.” 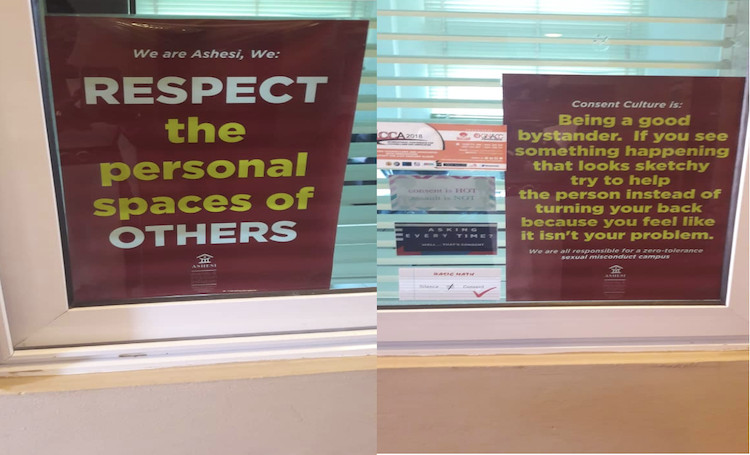 In April 2018, the organization also started the Survivors Anonymous project, an offshoot of #LetsTalkConsent that provides a support group for victims/survivors of sexual abuse to heal and recover from trauma. A recent Survivors Anonymous meeting in September 2018 encouraged its participants to use writing as a powerful tool for therapy.

In addition to #LetsTalkConsent, Drama Queens conducts other programs that provide safe spaces for open discussions about feminism and sexuality. One such program is a monthly event called SpeakEasy, during which a pan-African or feminist topic is chosen as the focus of conversations that aim to lead to the group better understanding it. SpeakEasy events are held at different locations in Accra; past SpeakEasy topics have included LGBT history, rape, and African spirituality. Between 60 and 100 people, many of whom are young Ghanaians not previously exposed to these topics, generally participate every month during these events. It is often clear there is a learning curve among participants. During one event, for example, a few people who had initially identified as feminists quickly realized that their feminism wasn’t intersectional or inclusive, and were forced to challenge their own preconceived notions about the sexuality spectrum.

Recently, Drama Queens started a new film workshop in collaboration with Queer University, a Chinese LGBTQ+ advocacy center. The workshop enabled people who identify at all points on the sexuality spectrum to tell their stories through film. By enabling young people to share their own stories in this way, Drama Queens ensures that their activism is sustainable and their messages will spread to an even wider following.

There is no question that Drama Queens has given young people many different tools to discuss consent and sexuality in Ghana. They have broken down initial barriers so that people can now talk more openly about gender and sexuality through social media, art, and activism. Drama Queens not only started this conversation, but has also become a significant part of it, as its members continue to do the hard work of pushing their audiences to face uncomfortable conversations and encouraging people to think about how language and behavior propagate rape culture and harmful ideas about gender. Drama Queens feels their work offers a sense of hope that, little by little, consent will be better understood, and that this understanding will help lead to a shift in how Ghanaian society understands and talks about rape. But they also acknowledge that there’s still much left to be achieved. As Nephety Mac-Okang, communications manager for Drama Queens, declares, “We hope that Drama Queens will establish a movement of young Africans who challenge systems of injustice and are committed to building a more loving and freer world.”

Drama Queens is doing the hard work of  changing norms, culture and exclusionary practises, and this requires financial resources to support the rental of theater facilities, printing posters, and compensating volunteers and/or staff. Giving to FRIDA would ensure that young feminist organizers like Drama Queens are not limited because of lack of resources.

Sondos Shabayek, Project Director at BuSSy, spoke about the importance of making our movements sustainable…