Outside the Lines of Home: FearlesslyFRIDA in Lebanon

բարի գալուստ, հազար բարի:  “A thousand time welcome” – This is the fourth creation of the Outside the Lines Project by FearlesslyFRIDA. In the latest workshop, The Fearless Collective partnered with several local organizations and activists including Beyond Borders, a FRIDA grantee partner. Together, they unpacked the idea of ‘home’ and created an impossible home of their own. Syrian, Lebanese, Kurdish, Turkish, Armenian, Palestinian, Indian, Ethiopian and Pakistani women and men lived together for a week, making art, comparing histories, and holding space for difficult conversations.  They explored the ritual of packing and unpacking as a symbolic reference to leaving and making homes. Read the photo essay below that captures the magic of this ‘home’. 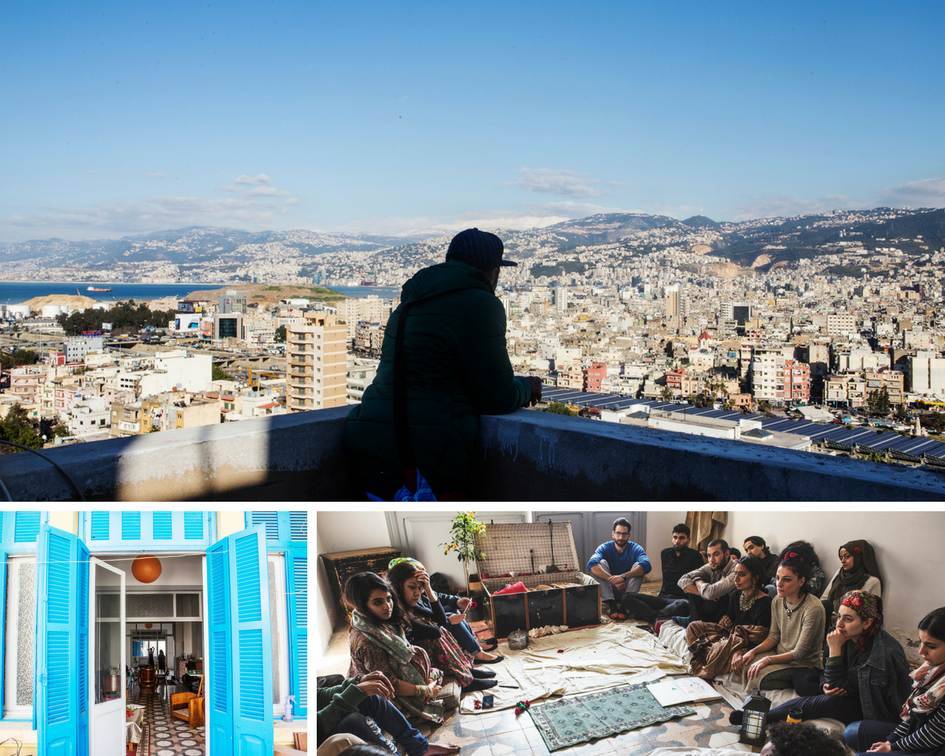 THE CITY: People from around the world come to Beirut seeking refuge, roots, love or work.  Beirut becomes home, everyday, a reluctant one though.  Fearless Collective also arrived in Beirut to find home. What makes us feel at home? On a map, In a suitcase, a backpack, a family, a camp? While ours was a search for the metaphorical home, we did find a physical home in Sanayeh House.  Here, women from Armenia and Turkey, separated by histories of violence and discrimination- learnt that their grandmothers sang the same songs;  women from India and Pakistan, joined forces as co-creators, we danced to the beats of Syrian boys rapping their poetry written out of love for their land; people from a broad spectrum of identities and sexualities talked love and relationships over shared meals. Fearless Collective hosted a diverse group of people at our home in Beirut to find our shared universal resonance and to reclaim our story and route to home. 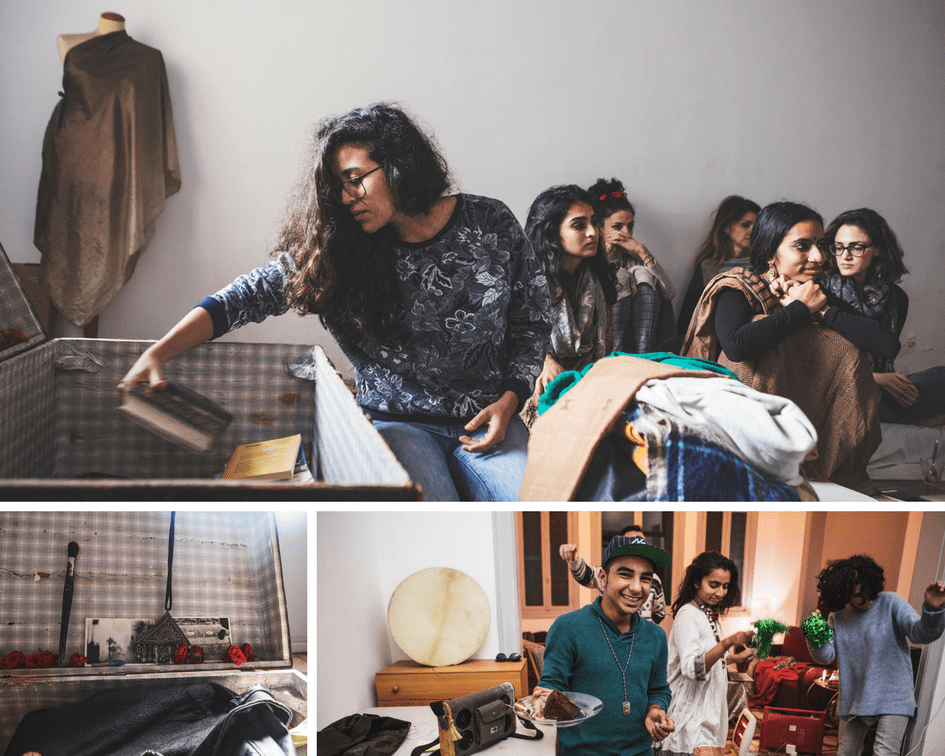 THE RITUAL: We began the workshop by each naming the place we call home and putting a talisman- a little piece of home – into a big metal trunk we found. This trunk held within it – a jacket of the father of a young boy from Syria,  the earring of a migrant worker from Ethiopia, a handful of earth from a mountain in South India.  In fearless workshops, we use ritual as a performative action to take us into a deeper emotional space. Here we looked at the ritual of packing and unpacking as a symbol of leaving and making homes. In the second step of the ritual- transmutation, we asked “What makes you feel at home?” -the comfort of food, the familiarity of language, the acceptance of self, the finding of love in unexpected places. As we cooked, danced dabke, attan, bhangra and more. celebrated several birthdays over one cake, over food, stories, warmth, a roof above our heads while it rained, and music, there emerged an image: of taking our roots along the routes we travel, geographically as well as metaphorically. 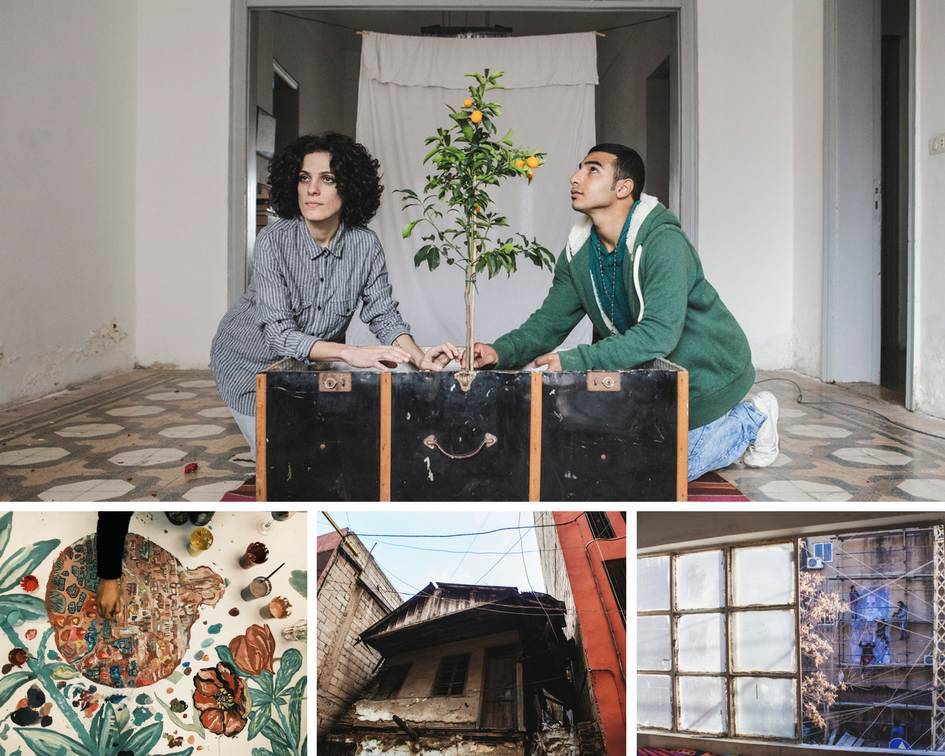 THE VISUAL: As we began to envision an image for our painting, pomegranates emerged as a strong symbol of resilience, represented in stories held across the different communities participating in the process. Out of our conversations grew the image of two people, a woman from Armenia and a boy from Syria, packing a pomegranate tree into a trunk; a symbolic reference to carrying our stories and our resilience with us as the seeds we plant to building our new homes: we carry our roots along the routes we travel. Bourj Hammoud was originally- a neighbourhood built on top of reclaimed marshlands to house Armenian communities fleeing ethnic violence. Now, as the Syrians come, there are layer upon layers of history, trauma and public memory embedded in this space. Here, amidst angry graffiti and images of homelands – we found our wall. “Let me give you the city I have been carrying in my mouth”, pomegranates with ancient maps within them. 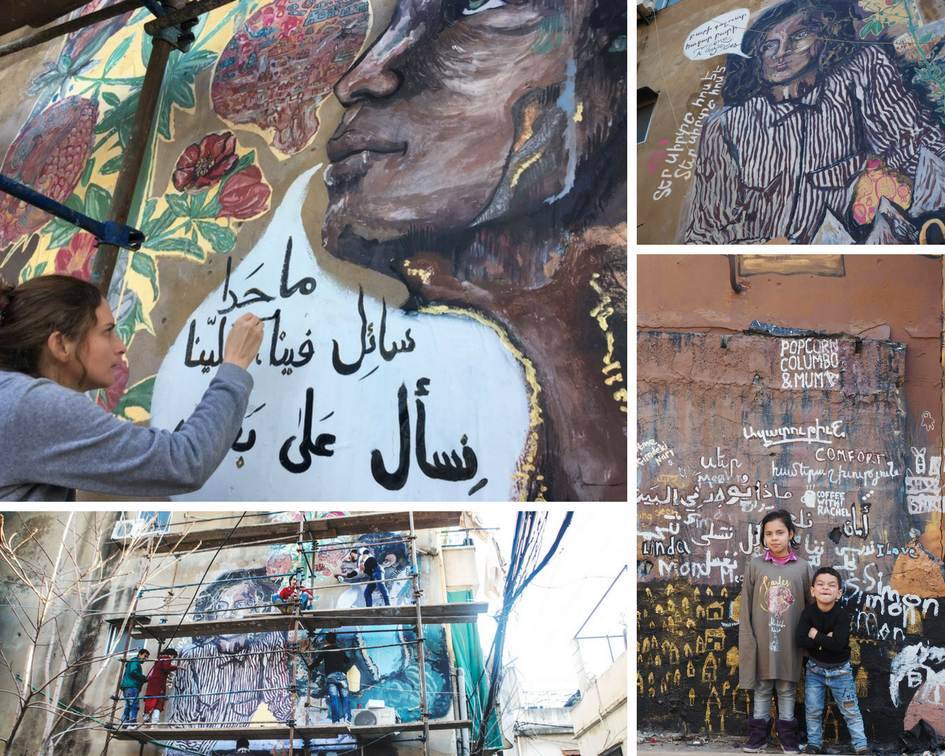 THE COLLECTIVE ART: Our neighbours in Bourj Hammoud opened up their space to us: let us into their houses, kitchens, and conversations.  In our neighbourhood we found people in all their vitality, each holding different opinions, political affiliations, loyalties, cultures.  Over the week, there were arguments, inhibitions, conversations, chatters, and whispers.  There was difference, but never indifference. How did we move from this difference to a shared affirmation?  An affirmation that accommodates us, and challenges us, compassionately?  When one of the women among our neighbours said to us in the middle of a difficult conversation, “but you are welcome a thousand times,” we knew we had found this affirmation.  To welcome everyone a thousand times, despite – regardless – beyond.

In Beirut, we learned that creating spaces for personal narratives to be spoken and shared allows us to step outside of these lines, if only momentarily, to reclaim our power to define ourselves and choose where to be home. Our murals become altars to public memory. Everyone who joined us wrote something that made them feel at home, so that in the end, we were left with a trunk full of tiny golden houses and a multi-lingual map of routes to home.

‘A thousand times welcome’ – she said repeatedly, with teary eyes and crimson cheeks. A neighbour, to our mural, she lives in this apartment in Bourj Hammoud with her Syrian-Armenian family, having moved to Beirut after they had to flee Aleppo. They arrived in Beirut, as many like them had arrived here a hundred years ago fleeing a genocide. Between the genocide and a war, almost a hundred years apart, are many stories of people who have made Beirut home. A city of sharp streets and fading bullet holes, high rises and crumbling houses, a city that keeps becoming home, a difficult one, but a home nevertheless.

What is more important: the departure, the arrival, or the story? Home is often one long continuum of all these, no matter if your point of departure is war, homophobia, opportunities, or love. 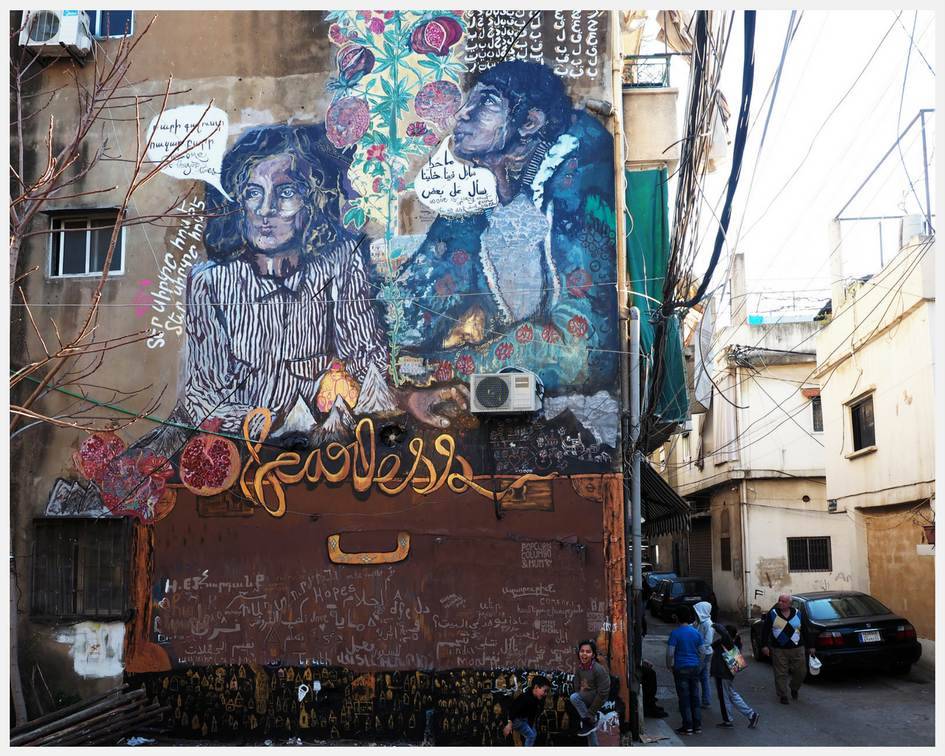 THE MURAL: A little nook tucked away at Rue 82 in Bourj Hammoud stands monument to this collective affirmation of home, beyond borders and language.   A woman packs her life into a suitcase, with deep extending roots into the earth and says in Armenian- the proverbial  բարի գալուստ, հազար բարի:  “A thousand time welcome,” while a 17-year-old Syrian boy with maps of ancient cities in his chest, unpacks and looks up at a pomegranate tree growing out of the suitcase, into the sky and affirms: “ألف أهلا و سهلا”  –“When  no one is asking about us, let us ask about each other.”

© All art by Fearless Collective, along with members of Beyond Borders and several other women, men and children, young and old, who joined hearts in collectively creating the mural.

Special thank you to Beyond Borders, Migrant Workers Center, Qorras, and The Arab Foundation for Freedoms and Equality. More appreciations and thank you’s in this blog of gratitude here.

Outside the Lines of Home is part of the #FearlesslyFRIDA initiative.

Hasmig Tatiossian is a young feminist activist and the co-founder of Stega: A Perfect Union, a…

"Burnout is defined, and subjectively experienced, as a state of physical, emotional and mental exhaustion…

In honor of the International Day against Homophobia, Transphobia and Biphobia (IDAHOT) 2017, one of…