When the personal is the political

The feminist struggle is deeply personal and unabashedly political. The work we do has a direct connection to our personal standpoint–our identities, our location and our geography. In the current global political climate we cannot dismiss the relevance of understanding displacement from ‘home’ and unpacking what it means .

Today, on World Refugee Day (June 20), we want to highlight the work of two young feminist groups who are doing the incredibly difficult and courageous work of advancing refugee and migrant rights in their communities.

Forum Komunikasi Masyarakat–Berkebutuhan Khusus Aceh (FKM-BKA) operates from Aceh, the Indonesian province on the northwest tip of Sumatra Island. As an island nation, when migrants last arrived in Indonesia in 2018, refugees came from the state of Rakhine (Myanmar). Prior to that, several Rohingya groups were often stranded in the eastern sea of Aceh in their escape from attempts to seek asylum in Australia.

Members of FKM-BKA voluntarily work with migrants in refugee camps and help them socialize with the local people and offer any mental health care and support they may need at a time of trauma and displacement. In 2016, when the earthquake hit Aceh, the group was involved in the Disaster Program Response and participated in the Mother and Children Healthcare Program in the tents. It is then that they became more actively involved in advocating for the fulfilment of women’s rights in refugee camps. 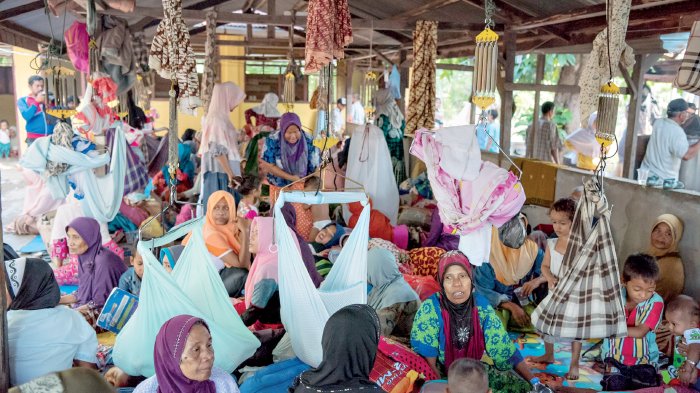 A picture from the refugee camp that was set up during 2018 Aceh earthquake in Indonesia. Picture credit: FKM, BKA

Tia Sasmita Sari from FKM-BKA explains how we are in a current global political environment of vulnerability. “With the unpredictability of how things are going globally, the potential for conflict, war and several embargoes will complicate the condition of society socially and economically. There will be many possibilities for refugees to emerge compared to a few decades ago. Advocating and ensuring that every refugee is a civil society member that must not be harmed, has the right and appropriate services is critical. We must provide support for them to get a better life for any reason regardless of their ethnicity, religion, race and political views,” she says. The group hopes that this World Refugee Day, we all get the inspiration and opportunity for communities and organizations to be more caring, collaborative and active in supporting women’s rights of refugees.

Refugee and migrant populations need to be treated with the same love, respect and dignity given to any other category of people. A young feminist group in Poland is using food as a brilliant way to connect people and exchange each others’ culture and tradition. Named GośćInność, the word in Polish means ‘hospitality’ which forms the basis of what the group is doing. This young feminist group’s motto is Let’s bring diversity to the table!, and their philosophy is based around food. Together with migrants and refugees, GośćInność organizes educational cooking workshops for youth. The initiative was started as a response to learning children and teenagers in Polish schools were using the word ‘refugee’ as an offensive term. Since then, their goal has become to give school students the opportunity to interact with people of different origins, religions and cultures.

Since food constitutes a natural need of all the people regardless of their origin, race, religion or gender, cooking together with migrants and refugees helps fight against stereotypes. It provides an opportunity to meet in-person women and men of different origin and learn their personal stories, through food, with a particular focus on women’s rights around the globe. Picture credit: GośćInność, Poland

Ever since the influx of asylum-seekers to Europe provoked a wave of hostile attitudes toward newcomers, the Polish word for ‘refugee’ has gained a negative connotation among many teenagers who have started using it as a curse word. Though many of them have never met a person of different ethnicity or religion, the words ‘refugees,’ ‘Muslims’ or ‘migrants’ often cause an image of a ‘dangerous other’. “Although hospitality is – at least theoretically – so deeply rooted in the Polish culture, only few Poles realize that the Polish word ‘gościnność’ consists of two other words ‘Guest’ and ‘Difference’.” they explain.

That is how GośćInność has become the name of educational cooking workshops run by immigrants and refugees, and dedicated for youth aged between 9-16 years old. Over 300 participants have taken part in their project that also received a distinction in a contest organized in Warsaw for the best non-governmental initiative in 2017 in the category ‘innovative’. “As Gościnie Globalnie we want to continue our mission focusing further on migrant and refugee women from the perspective of women’s rights,” they say.

Nina Lazarczyk-Bilal, a member of this group, says that each one of us can do more than we think to support refugees and migrants in the communities that we live in. “We can show solidarity. Teach others about the causes of migration. Make people realize that climate change is also a main driver of the migration. Share stories about people with refugee experience and the struggles that they go through. Share equipment and things they need. Vote for political parties which support tolerance and diversity,” she says.

People and families migrate for different reasons, many of which are  not in our control. Some of us are forced to flee violence and persecution, some of us migrate for personal and family reasons, while some of us become victims of natural disasters and are compelled to take extraordinary risks to reach safety for our families. The one thing that unites us is our humanity and the right to lead a life of dignity. Becoming a refugee or migrant, and being displaced from what we call our home is a deeply personal experience. Yet, it has the potential to have political ramifications and is an opportunity for feminist activists and human rights defenders to come together and find ways in which we can support those affected.

Groups like FKM-BKA and GośćInność are doing an incredibly difficult work of working together with migrants and refugees and ensuring that their lives are healthy and dignified. We draw inspiration from their work, their innovative strategies their undying commitment towards the movement.

Along with general advisory recruitment, this year FRIDA has committed to expand its Advisory Committee…

In honor of the International Day against Homophobia, Transphobia and Biphobia (IDAHOT) 2017, one of…