It all started at the Women and Gender Constituency at Climate Change conference in Paris, where young feminist activists shared stories of feeling ignored and marginalized in the larger movement.

Realizing, for example, that they are the only young woman in the room, and very often, also the only young person of color; anecdotes of colleagues silencing them or not taking them seriously; of men making sexual and disrespectful remarks; stories of young feminists facing the worst consequences for their activism whilst simultaneously being erased from the movement. All against the backdrop of rising global temperatures, disappearing forests, more frequent and intense natural disasters, increased food insecurity and more.In the case of women environmental defenders at the frontlines of mining, logging, large-scale energy projects, climate and environmental impacts, and others, these experiences take on increased levels of danger, violence, and risk.

We had more conversations throughout 2016 in various online and offline spaces, convened in connection to the Young Feminists for Climate Justice Facebook group, an independent platform that was launched with support from Women’s Environment and Development Organization (WEDO). The Young Feminist Climate Justice Storytelling Project was thus born as a platform by and for young feminist climate justice activists to collect and share their stories.

Today we are pleased to share with you, ‘Rising Currents Stronger Movements’: a zine of prose, poems, art, cartoons, and more that tell the stories of how climate change is experienced by young feminists.

This is the first zine of the project, which seeks to shine a light on these experiences and amplify these voices. The general objective of the project is to increase the visibility and diversity of youth perspectives and experiences at the intersections of feminist and climate justice struggles. This zine includes stories written by activists themselves, as well as stories written by story collectors.

After receiving over 100 submissions, this zine is a collection of over 30 stories, art pieces and poems by young women and trans* youth resisting corporations encroaching their territories, building alternatives in their own neighbourhoods and towns, and defending their water, land and forests. You can read more of the submissions and full details of the project on the Stories website. 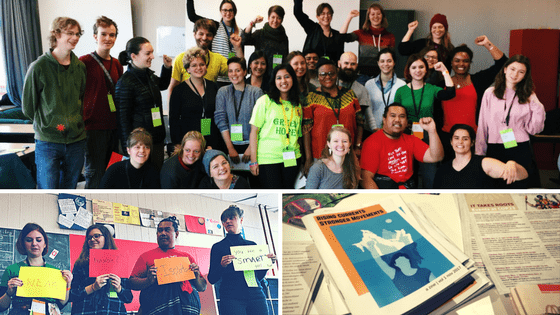 The zine was officially launched at the #COY13 (Conference of Youth) in Bonn, Germany, where young climate justice activists came together ahead of the annual climate change conference.

FRIDA is proud to be a supporting partner of the Young Feminist Climate Justice collective, along with other supporters such as Sierra Club and the Women’s Environment and Development Organization (WEDO). However, the project, and the stories collected, does not belong to or is branded by any particular organization, but rather is a platform by and for young activists who identify as young feminists for climate and environmental justice anywhere and everywhere. To learn more about the storytelling project for young climate justice activists, click here.

As you know, we have been sharing, sneaking and inserting posts for the last couple…

A special post by Judit Abarca, FRIDA advisor for the Latin America and the Caribbean…