To understand FRIDA’s achievements in the context of the larger movement and history of feminist organizing, we reached out to Lydia Alpizar to share her personal reflections on why it is important to document these beginnings, what it contributes to our knowledge of movements, and what were some of the lessons learned. Lydia was the Executive Director at the Association for Women’s Rights in Development (AWID) who helped kickstart the beginnings of FRIDA.

This interview will be the first in a series of interviews with FRIDA’s founders and key individuals that helped create the world’s first young feminist fund. It is part of our commitment to documenting our journey.

1. Why is it important to document the history of the fund?

The creation of FRIDA was an important undertaking and quite unique. Not many donors made major investments to support women and women’s rights in general (especially back in 2008-2010, when the idea of creating a Young Feminist Fund came up). And if we think about supporting young women, and specifically, young feminist activism, the support has historically been really meagre and marginal. So, it is important to document the process to show what it takes to create such a mechanism in a way that is committed to feminist movement building, effectively resourcing young feminist organizing, ensuring a process that is youth-led but multigenerational (and make the best of some of the accumulated knowledge and wisdom we have built together as feminists movements on this field throughout history), and make visible the amount of work and resources (financial and in-kind) that are needed to create such an amazing and successful fund.

Incubating a new organization is a role that could be quite invisible, because it is somehow, a type of care work that needs to be done (and like most care work, it is commonly taken for granted and not visible). So, as feminists, we need to document our stories, including the ones of how we build our organizations and movements, and ensure that all the actors, resources and work invested, is described and made visible, and we can draw lessons from it for the present and future.  One institution that deserves recognition as well is the Tides Foundation, where FRIDA set up a Collective Action Fund (with similar benefits as a fiscal sponsorship) for FRIDA to be able to operate, meanwhile allowing the fund to figure out its legal registration.  Having an institution that provides this kind of services, was of great help to FRIDA, the incubators and the whole process. 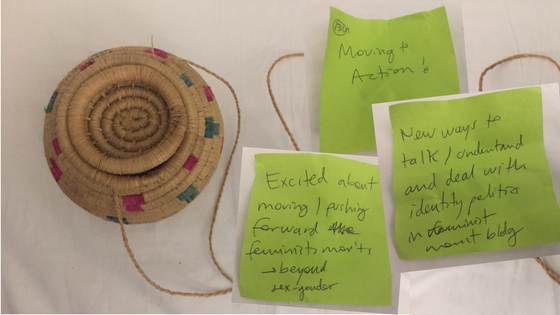 2. What does it contribute to our understanding of funding movements or organizing?

The incubation of FRIDA was a new type of undertaking. We engaged in supporting a process that was quite unique: not only creating a new women’s fund working at the global level, but one that was built from a feminist movement building perspective, in a multigenerational way, ensuring the process was youth-led at the same time.  Betting on young feminist leadership pays off, and can generate incredible impact in advancing feminist agendas, women’s rights and justice, and in supporting movement building and our sustainability.  The ways in which FRIDA has grown, has innovated in the field of philanthropy, the way it relates to its grantees and partners, how it communicates, its grant making model, are all quite unique, and they have been built by young feminist themselves.  There can be many paths on how philanthropy can be done,, but ensuring accessible flexible resources reach the hands of young feminists around the world, supporting their bold ideas, is crucial for our movements to benefit from all the creativity and contributions that young feminists are making in the present, and also to build sustainability for the future.  Documenting the process ensures that we can learn from how we do this kind of work, so others (donors from different funding sectors, and actors from feminist movement and allies) can build from the foundations created and benefit from the knowledge and experience we accumulated in the process.  We do not always take the time, prioritize or have access to resources to do this. So, it is great that the FRIDA team decided to invest resources on this process.

3. What were the major lessons learned? What surprised you the most?

There are many lessons learnt and a few surprises, these are a few of the ones I could think of…

– It takes longer than you think to build such mechanisms/new organizations.  We originally thought the incubation would be a 2-3 year process, and it really took 7 or so (with a gradually lesser level of contribution and engagement by incubator in the second half of the process probably).

– The financial resources needed to incubate and launch such new initiative are significant. Adding them all up is important, so we can make visible what it takes to create such mechanism.  AWID was able to support this process, because of the level of core support it was able to secure, the flexibility it gave AWID to do this, and the political trust of a group of donors that were committed to support the process and make this happen

– The fast pace in which FRIDA grew and took off was amazing, and ensuring that young feminist themselves are the ones leading the process, shaping it, but building from multigenerational knowledge, was a great proof of what can be done when we build from our strengths, trust the process and ‘walk the talk’ about valuing and recognizing the amazing contributions and capacity that young feminist have in our movements (and what can be done when they lead!!)

– In the current world context, where corruption is rampant by governments and transnational actors and financial systems seem to be operating and accessible all over the world, it is actually really hard to create a mechanism that can actually function globally, with flexibility, responsiveness and resilience.  One of the things that delayed the process most, was actually defining where to register FRIDA and how to set up bank accounts and other operations for a young feminist fund, with a virtual team and operations in most regions of the world. This was a bit of surprise to me, that it would be so complicated and hard to do this.