Full of courage, fire and humility: breathing with the Zapatistas

“We agreed to live, and  for us, living is fighting, — each of us according to our means, our place and our time.” — Comandanta Marina

On March 7, 2018, after a 7-hour bus ride from Tuxtla (the capital of Chiapas) we finally arrived at the Zapatista Caracol “Morelia”, an area where the chiapanese jungle starts. Along with thousands of other women from over 38 countries, we carried our backpacks, sleeping bags and tents to cross two giant banners; the first read: “Welcome women of the world” followed by a second one: “Men forbidden to enter”. As we were received by the Zapatista women, we started recognizing the iconic black masks / balaclavas (pasamontañas), and the red scarfs they use to cover their faces. Their well known organizational skills of their army were also manifested in the registration process.

As the night began upon our arrival, we got some insight into what the event would be like, a reflection of what seemed like a never-ending line to enter, with more than seven thousand women aligned. People that had travelled long journeys to be there, tired but content, exhibiting a strong commitment from their hearts. The energy of rebellion and dignity of the Zapatistas was already evident in their clarity and strength of the call that had resulted in such a massive attendance turn-out.

We invaded the place with tents, and sleeping bags, at the point it was hard walking within the fields.  Even under the stages, you could find women sleeping and adapting to the cold unexpected weather of the night. We set up our tent, only to discover we were next door to the tent of Reflexión y Acción Feminista, a young feminist group that FRIDA funds in Merida – we were neighbours! This feeling of sisterhood was present the the whole time we were there in the caracol.

On March 8th, after a very cold night, at 6 am, we were woken up with the traditional “mañanitas” birthday song. As the song started, some women jumped from their tents and ran excitedly to the stage to dance, while the rest of us were listening, still waking up and cheering from our sleeping spots. We remember actually crying a few tears at that moment, what Utopia have we woken up in, how were we lucky enough to be surrounded by such incredible luchadoras, in this beautiful place. Such an unforgettable welcome, to be awakened by the Zapatista women who sung to us…waking us up both literally and metaphorically.

On the opening day, the Zapatistas gave a beautiful and poetic speech. (You can read it in English here).  They talked about their struggle as indigenous Zapatista women and invited us to organize, to struggle from our own spaces, without competing, from all of our diversities but in one affinity as we were all women in struggle. As the day warmed up, the sun came out to shine, it really felt like a festival, with spaces for shopping shared by Zapatista women and other participants  selling their art, jewellery, clothing, medicinal lotions & creams. Throughout the day at any one time there were people playing basketball, volleyball, soccer, dancing and live hip hop, batucada, attending amazing sessions, sleeping, relaxing and singing together in circles. 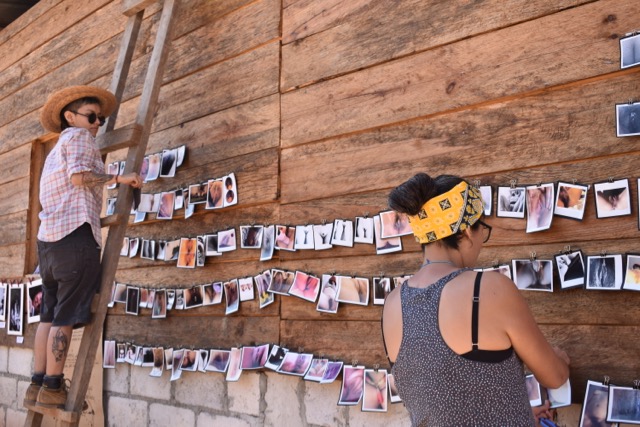 The sessions were held by participants and intended to be a space for everyone to share their own experiences. You could find an ocean of workshops on all subject matters: sports, art, poetry, medicine, politics, dance, theatre, drawings, urban and rural experiences, photography and other art exhibitions. Women gathered from different countries spoke of motherhood,  midwifery, vaginas, love, polylove, bodies, alternatives to medicine, meditation, reiki, decolonising our world, pleasure, politics, the 7 principles of Zapatista women, land, technologies, healing… and more! It was actually hard to stay in one place, as there was SOOOO much happening at any one moment! These activities were followed by concerts and poetry in the night, some of which were led by Zapatista women, and some others by women’s bands who had been invited. 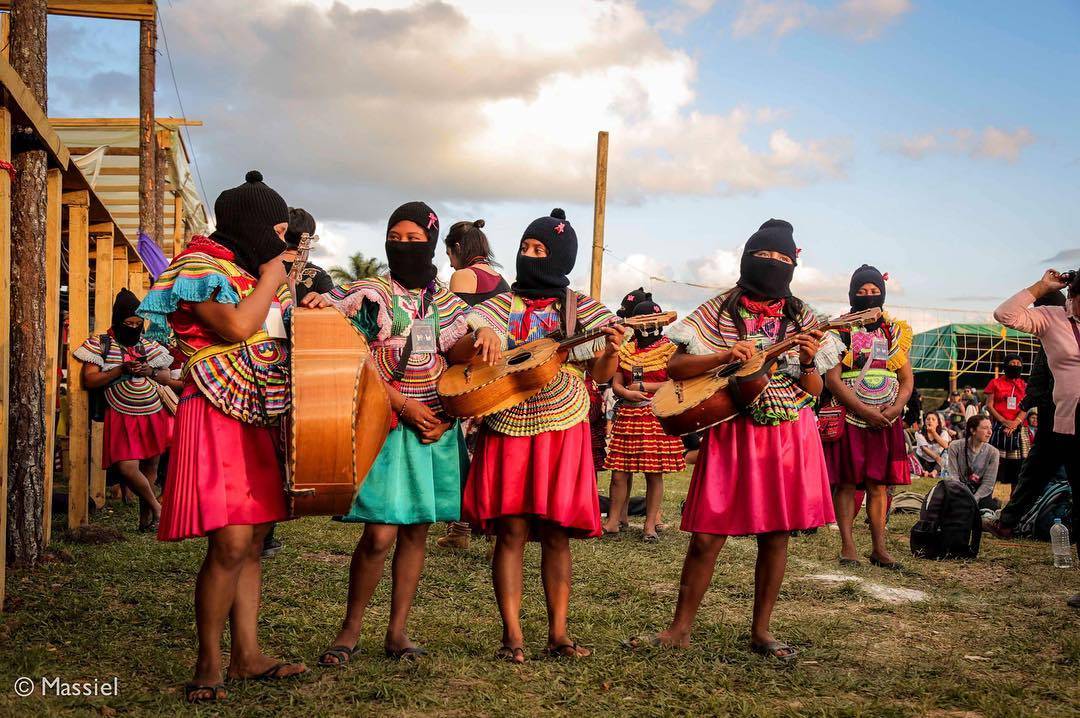 Most of the attendees that were leading the workshops were from feminist collectives. Some of FRIDAs grantees groups attended, as well as members from the Meso American WHRD Initiative. It was inspiring to listen to collectives talk about their work and to understand how much value and legitimacy they put on the politics of being completely independent and fiercely autonomous. Many proudly said, they did not have any funding and were completely self organised.  This sparked some interesting reflections about what FRIDA can do to support such groups, that genuinely do not want funding, and how important such questions are as we work on defining our next strategic framework.

A few days later, after an incredible mosaic of moments of intensity, it was our time to leave. The sun rose, we packed up our tent to leave in the early hours of the morning, when the earth was still wet with dew. Most people around us were still asleep, resting after dancing into the evening to feminist cumbia, Somehow our alarms didn’t work so we were in a bit of a mad rush at the end. With our mattress in hand, dragging on the ground, we scurried to the exit (stressful then, now seems a little comical). As we were leaving, we both stopped in our own way, turned back and felt such an incredible sense of honour to have been there, to have been part of this moment. Full of courage, fire and humility to have seen more closely the power and passion of the Zapatistas.

It was a very inspiring and motivating event. It was also quite an experience to not see a single male member around us the past couple of days, as every single detail was singlehandedly managed by the Zapatista women. But the most inspiring thing to see was the way Zapatista women organised themselves, the way they listened to each other, to us, the way they communicated and worked together, their beautiful dresses, their companionship and affection, the love they put into everything they do and how they translate that into their paintings, their music, their poetry, all their arts characterised also by their great strength.

During the trip back, on the the bumpy and curvy road across the mountains, we sat in silence, a little in awe, so quickly it felt like a dream, a parallel universe, a place where real alternatives were being lived. We arrived at the airport, dirty and happy, we lay all of our tent and all our things out on the pavement and reorganised ourselves, people looked at us a little strangely, we didn’t care. It was a bit of shock to be surrounded by men almost instantly–security guards, taxi driver, people working at the airline desk. It felt as if we had been to a secret and magical place where happiness and collective power and truth was slowly but surely curing the internalised patriarchy within us. Somehow we felt a little stronger, a little braver, hearts full and extremely grateful for the chance to have been there.

As narrated by Beatriz Nuñez and Ruby Johnson

In partnership with leading global women's rights organizations, a group of young feminist activists have come…

Today marks the last day of Amina Doherty’s tenure as FRIDA’s Coordinator. And though we…