By Ruby Johnson of FRIDA and Felogene Anumo of AWID

We stand at a significant moment in history. On the one hand, women human rights defenders everywhere—from the USA to China, El Salvador and Russia—are facing surveillance, persecution, jail time and violence for speaking up against injustices. Widespread racism and police brutality, xenophobia, populist and fundamentalist uprisings, as well as ecocide and the violations of indigenous people’s territories, lands and bodies, are the order of the day. On the other hand, these crises have birthed critical moments and movements of resistance, often with young feminists at the frontlines. From the Women’s marches in the US to Antarctica, to #NiUnaMenos, a movement against the violent murders of women across Latin America, to the Dreamers in the US fighting unjust immigration reform, to the #FeesMustFall movement in South Africa which demanded the decolonization of education systems, as well as the #BlackLivesMatter campaigns which drew attention to black victims of police violence, to the abortion movement in Poland, young activists are working with determination, passion and creativity.

But these young feminists are not a homogenous group. They are young women, trans youth and girls from across the world who are experiencing oppression and rights violations first hand. They have distinct politics and their intersecting identities shape their organizing. They are the young trans women from Haus of Khameleon in the Pacific Islands, advocating for trans equality and climate justice. They are the founders of Copper Rose, young women working to give girls access to menstrual hygiene and raise sexual and reproductive health awareness in Zambia, and the African queer women who started Holaafrica, sharing their experiences and knowledge of sexuality and pleasure, challenging the status quo. They are “Semillas de Libertad” pushing against discrimination and violence against women’s bodies in El Salvador as the daughters of sex workers. Young feminist activists are pushing back against patriarchal contexts wherever they find themselves. 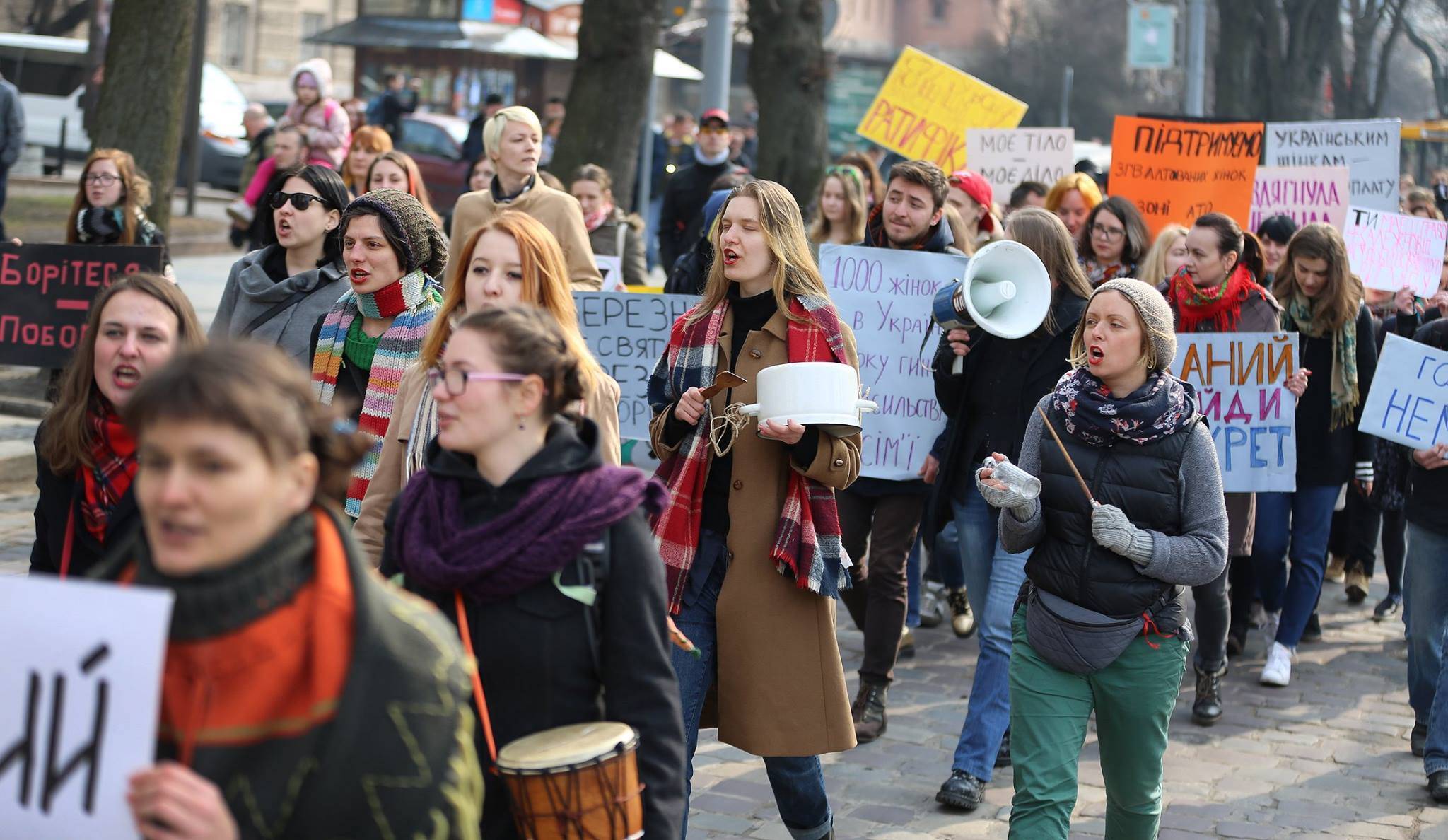 Members of Feminist Workshop join a a street demonstration on March 8, in collaboration with the movement International Women Strike, in Lviv, Ukraine.

Today’s young feminist groups, emerging in an era where technology and unprecedented surveillance are both moving at lightning speed, are choosing autonomous collective and community-driven alternatives to formal NGOs to further that work. Many are rejecting traditional leadership models and organizational structures and organizing in informal and clandestine ways. Forty-six percent of the young feminist organizations who participated in a joint AWID and FRIDA research on “The Global State of Young Feminist Organizing” were unregistered. Their reasons ranged from financial inaccessibility, personal choice, administrative burdens, and threats to security.

However, with this informality comes increased risk and a difficulty in accessing funds. Our research into 1,500 organizations in over 120 countries showed that over half of young feminist activists feel unsafe some or all of the time. From online trolling to sexual harassment on the street and physical attacks, young feminists are exposed to daily threats, intimidation, and violence. Often these threats are the result of backlash from local, state and national governments, as well as traditional leaders, non-state and fundamentalist groups. Our studies also reveal that opposition youth groups have been effectively organizing against young feminist groups on social media, and in person—for example, at the UN Commission on the Status of Women—undoing previous gains. Young feminists are at very real risk of being overshadowed by the youth congregations representing conservative forces.

Another significant challenge is that available resources are still not reaching their grassroots initiatives. Increased attention to gender equality issues, including a stand-alone goal dedicated to gender equality in the UN’s Sustainable Development Goals (SDGs), has yet to translate into the critical economic resources needed for young feminists to organize. The average income for young feminist groups in 2014 was $5,000 per year, with at least a quarter of groups working with under $500 annually. This shift from donor dependence is symbolic of a broader shift against mainstream ideas of development. 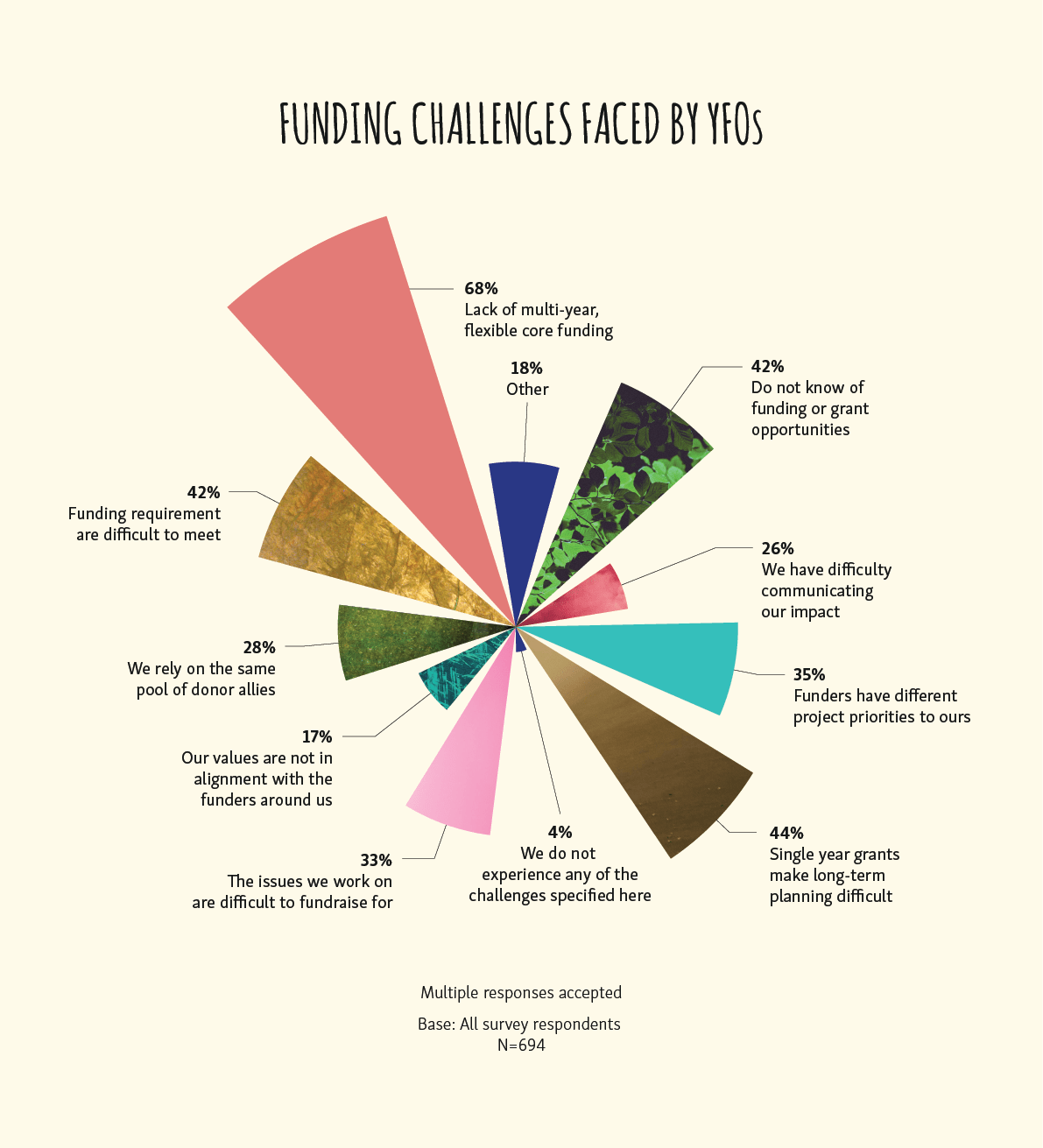 Indeed, young feminists are charting new paths, experimenting with creative tactics and embracing informal organizing models. They also represent the future generations of activists, and bring new skills and understanding to our movements. Although their struggles are not unique, young women, girls and trans youth do experience discrimination and violation of their rights in distinct ways, whether they are child brides themselves, experiencing online and street harassment, or are unable to access abortion services, they have their own experiences and responses to today’s problems.

It is crucial that funders find ways to support their efforts and move resources closer to the ground. This means channeling resources to unconventional approaches to change, and supporting informal and unregistered groups with core, flexible and multi-year funding that enables them to be agile and respond to change. It also entails taking risks and trusting young feminist activists to challenge the status quo in their organizational structures, tactics and leadership models. Where possible, funders and organizations should collaborate in supporting the trajectory of new and emerging groups, seeking not to overburden or formalize, but rather to reduce administrative burdens, working through fiscal sponsors, host organizations and women’s funds.

Money alone will not guarantee success, young feminist activists need holistic support, including opportunities to connect with other activists, generations, and the funding community, and access to leadership roles  in the grant making arena.

Young feminists are working in contexts of significant violence—prioritizing their safety and security is imperative to ensuring the sustainability of their movements. Organizations and funders can work with activists to prioritize their holistic security in many ways, starting with taking security and self-care seriously in their own institutions, allocating resources and transforming policies and practices to ensure they do not put their grantee partners or themselves at risk. Beyond flexible and core funding to groups, funders can support the increased capacity and resilience of groups by allocating dedicated funding towards security and wellbeing.

Initiating such critical steps will support change in the sector-wide attitudes towards self-care and security, reframing these instead as critical elements to sustainability and effective organizing. Young feminists are brave, creative, and resilient, and they need all the solidarity and support they can get. For more detail check out the AWID & FRIDA Report on young feminist organizing here.

This article was originally published on openGlobalRights. Please click here to view it in original, where it is also available in Spanish and French.

We are no longer accepting applications for the following posts. Thank you for considering! FRIDA…

Brenda Salas is an anthropologist by profession, and also a translator, journalist and cultural manager.…