The European Foundation Centre (EFC) held its 28th Annual General Assembly and Conference in Warsaw, Poland from 31 May to 2 June 2017. Over 600 philanthropic leaders attended the space to find the courage needed to re-embrace solidarity and how philanthropy can take the lead. The EFC describes itself as “a platform for and champion of institutional philanthropy” and is headquartered in Brussels, Belgium.

FRIDA was present at EFC’s conference through the presence of advisor, Magda Pochec from Poland. We got in touch with Magda to learn about the experience:

What was your role at the EFC and what were the highlights of the panel that you were a part of?

For me the European Foundation Centre’s Annual Conference in Warsaw was the first huge convening of philanthropists and donors that I ever participated in! As I work mostly at the national level in Poland, I have never been so connected with transnational spaces of interactions among the community of donors. EFC Conference is definitely an important forum of debate, which is attended each year by over five hundred people. Thus, it is of strategic importance that young feminists are meaningfully included in this space, so they can influence and contribute to the debate. My participation was kindly supported by Women Deliver as an alumnus of Women Deliver’s Young Leaders Programme. 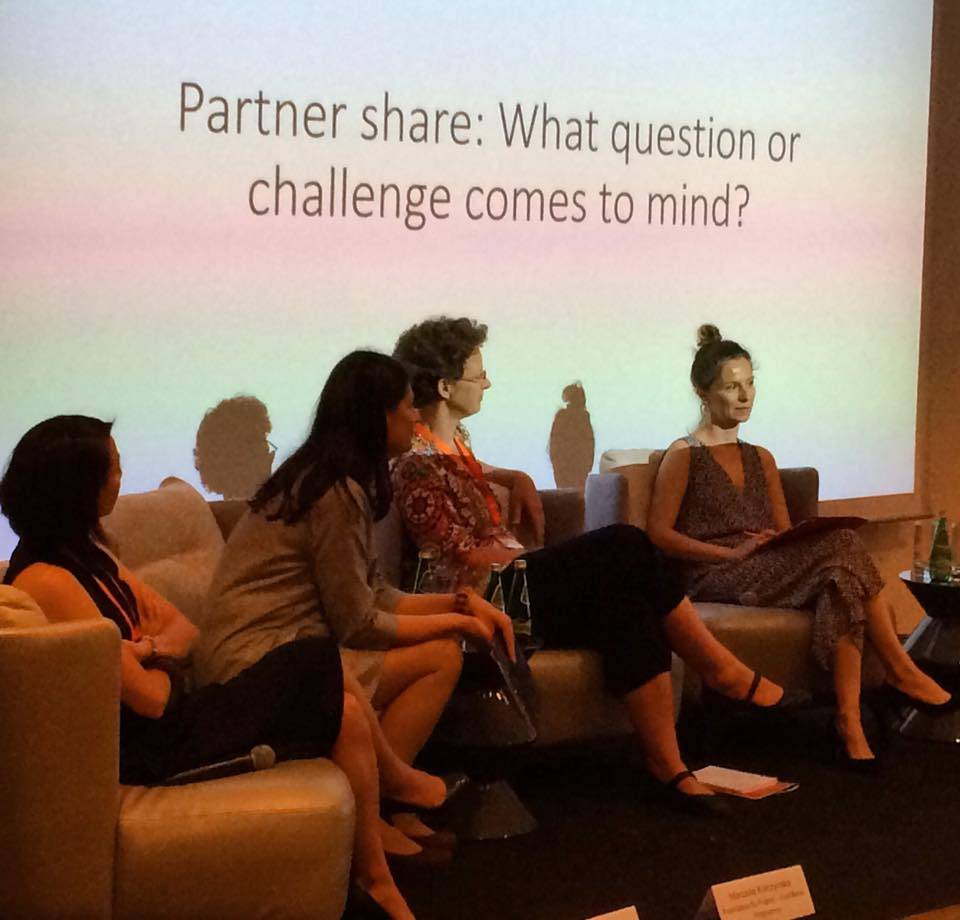 I’m extremely happy and satisfied that I had the privilege to represent FRIDA at the conference. Together with colleagues from fellow participatory grantmakers, we organized a successful session on the participatory practices in grantmaking. This session was initiated by The Red Umbrella Fund and Mama Cash. Not only did we present and elaborate on our respective models, but we also discussed the importance of the models underlying values and its impact on building movements, fostering solidarity, and shifting power.

Participatory grantmaking is increasingly becoming a recognizable voice in the philanthropy world. Do you think traditional funders are beginning to look into it and be open to the idea of flexible funding?

Our experience with this session shows that there is a huge interest in the topic and willingness to explore its potential. The session was even more popular and successful than we expected – at the beginning, there were not enough chairs to seat everyone who wanted to participate! The audience was rather diverse in gender and age, but not so much in people of colour. As one of our colleagues noted, there were many people with red badge chains, indicating there were actual EFC members who were a part of the audience, many of whom tend to represent large and traditional donors.

Although participatory grantmaking isn’t a very new concept, there is clearly a growing interest in it. It is increasingly perceived and recognised as a more democratic, effective and progressive grantmaking model. There are, however, a number of obstacles and barriers that hamper wider employment and implementation of it. Letting go of control is scary and might appear as quite a challenge for teams that are used to traditional, hierarchical structures and practices. In our highly interactive session (thanks to amazing the moderator Jen Bokoff from The Foundation Centre), we asked our audience about their concerns related to participatory grantmaking. The following issues, among others, understandably popped out: possible conflict of interest and how to manage it, time and money efficiency of the model as well as measuring its impact. 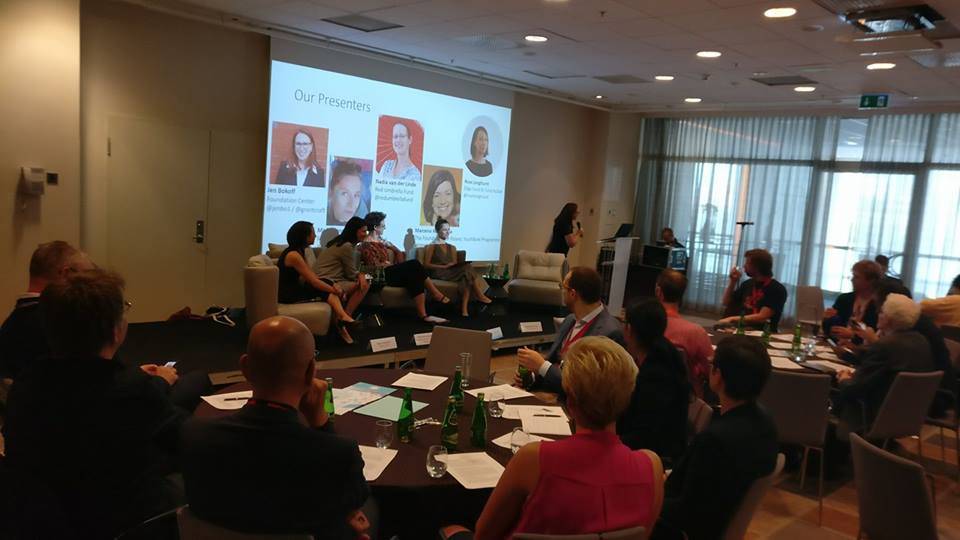 As a model, participatory grantmaking has sparked curiosity and interest among a diverse pool of people: funders, individuals, activists, and donors. How did your session contribute to bringing it more to the limelight?

I believe it is very important that the audience of the session were distinguished participants of the EFC Conference. Our session’s moderator, Jen, who has attended this Annual Conference in few subsequent years said that five years ago, such a session would not have been possible. This year’s session built on last year’s landmark speech of FRIDA’s Co-Director Ruby Johnson who was invited then to participate in one of the plenaries. This shows how conservative spaces are progressively opening up. It wasn’t only the session’s topic but also its interactive methodologies (including open space elements) and a selection of panelists who were changemakers in terms of power shifting. It is worth mentioning that panelists of this widely attended session were all rather young women.

Often, traditional donor spaces are seen as hierarchical and dominated by white, older men. How inclusive were the spaces you were a part of? What diversity did you witness in the pool of organizers and participants?

The EFC Conference space is predominantly white and rich. However, many people claimed that this year’s event was a landmark in terms of reclaiming space by female leaders. Although not great in total numbers, but great in passion, creativity, and commitment, the women’s funds community was very visible at the Conference. Our sister funds not only occupied physical spaces (building visibility, being vocal at sessions) but also dominated the Conference’s parallel online spaces. The newsfeed of the Conference application was completely taken over by progressive female voices. 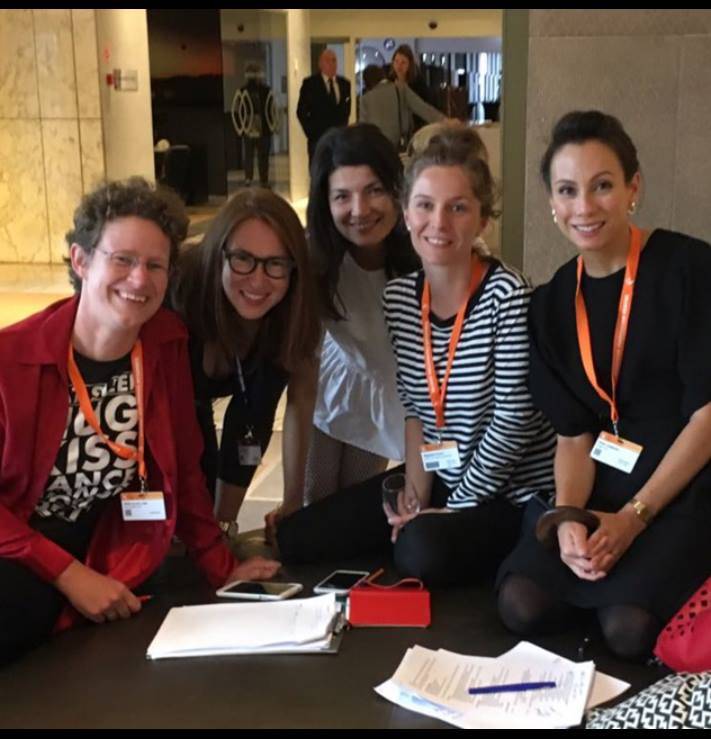 The opening plenary composed exclusively of young Polish female leaders (a very refreshing and inspiring experience!) who set the tone for the conference. It is worth noticing that in the last two years, the EFC was led by a woman from the region of Central and Eastern Europe. Arguably, it is the first time in the history of this organisation that a woman from this region, namely Ewa Kulik from Poland, took a lead. This female leadership certainly was not insignificant in terms of transforming conservative space of the EFC which made way for enriching the conference with new energy and voices. Nevertheless, there is still a huge gap between decision makers in philanthropy and people on the other end of the grantmaking process. Much more deliberate efforts need to be taken in fostering a diversity of voices and identities represented at the Conference.

In your own experience from being part of this event, what do you think is changing in key philanthropic spaces and what still needs to change?

I feel there is a growing openness to reflect on current grantmaking practices. I think there is a better understanding of how changes in the philanthropic world are necessary for the context of rapidly changing realities and challenges. I guess there needs to be a certain shift in mindset, which includes recognition of power dynamics and one’s privilege to adequately manage it. Donors also have to acknowledge that truly legitimate and better-informed decisions are those made by members of communities funders serve. What is also extremely important is relationships with grantee partners that are built on trust. Sincere trust is transformative, revolutionary and it mitigates imbalance in power. This should translate into offering more flexible funds as a consequence of a recognition that grantee partners know best how to effectively use the money.

Sondos Shabayek, Project Director at BuSSy, spoke about the importance of making our movements sustainable…