We are in Siberia. Young Feminists are everywhere!

My name is Saadat, and I am a Program Associate at FRIDA. Today I would like to share a story about a fascinating young feminist collective from Eastern Siberia in Russia. This learning visit was a long-awaited opportunity for me. As a Central Asian feminist, I was eager to build solidarity across borders with my feminist sisters in North Asia, and FRIDA’s contribution in facilitating such connections between underrepresented feminist groups and experiences from different regions is invaluable.

I Am Freedom is a feminist collective from Ulan – Ude, the capital of Buryat Republic with the goal of uniting young feminist women to provide mutual support through digital activism. It is FRIDA’s only grantee partner from North Asia and is located in one of the most remote areas of Russian Federation. Buryat Republic is a federal subject of Russia, located in Siberia, that forms a major part of North Asia. To give you an idea, this is where I went. Did you know, that to simply get to Ulan-Ude is a long and difficult journey, involving an airplane ride and a 6-hour bus ride around Lake Baikal? Nevertheless, I was eager to build solidarity across borders with my feminist sisters in North Asia.

Beyond their geography, this group interested me due to the historic and cultural background shared by my people, the Kyrgyz, and the Buryat (e.g. nomadic heritage, Russian colonization, marginalized indigenous Asian population). I wanted to learn what similarities exist in feminist movement building processes happening in both regions and how we we can better exchange our experiences and support each other despite the border that separates  us. Due to its limited decision-making power and geographical remoteness as a region, North Asia is often underrepresented in larger social justice movements. We had a discussion on how the opportunities and resources available to European Russia are simply not accessible to this part of Russia. This is further exacerbated by the “foreign agent” law, which prevents what little funding opportunities would be available to a remote region like Buryatia.

At the time of my visit, one of the biggest issues facing grassroots feminist organizing in Buryatia was the rise of the anti-abortion and anti-reproductive choice movement. I am Freedom began their feminist activism as a response to this and the patriarchal interpretation of the traditional role of young women in Buryat community. The image of “traditional women” both in Buryat and Kyrgyz society is often used by traditional and religious fundamentalists to portray women as subordinate and subjugate women’s right to free choice. This overwhelming focus preserving an ethnic identity does not necessarily emancipate women to make their own choices. 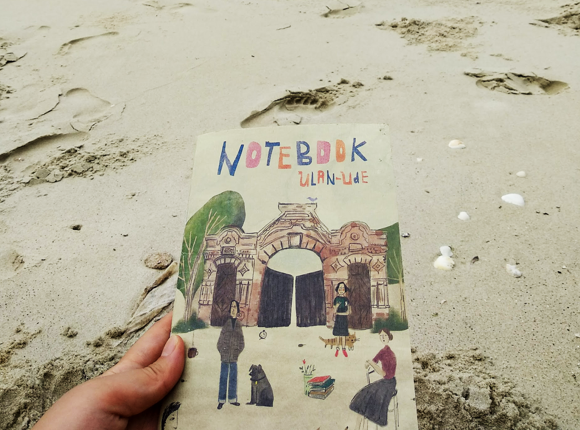 I took this photo few weeks after I visited the group. It is a notebook made in Buryatia by a local female artist (@sayakababayaka on Instagram) about the city of Ulan – Ude.

The young women of I Am Freedom met each other in one of the public city spaces, where they had a couple of  counscisioness raising discussions and began self-organizing. The activists use social media as their main tool for awareness raising, mobilization and female solidarity building among young women in Ulan-Ude.  The members of I Am Freedom have now become  fierce feminist advocates and opinion makers in Ulan-Ude. Before they came onto the scene, feminism was all but invisible in the city. Their online activism encouraged many young women to stand up for themselves and fight for respect. Increased feminist public discourse also opened up conversations on the issues of violence against women and sexual and reproductive rights that are considered taboo topics in Buryat culture. Some of the group members shared with me that feminism greatly impacted their own personal life and empowered them to make their own choices and live free from violence.

Due to constant attacks from anti-rights and hate groups, safety and security is considered a top priority for most feminist groups we support, and this group is no exception. During my visit, we discussed their safety and security practices as well as horizontal decision making. As any marginalized and underrepresented group, this group’s members had already been practicing their own security routines to keep each other safe, and we planned what could be done to enhance their capacity and take back the meaning of word “security” and make it our own. While having these discussions, I learned that I Am Freedom members are very supportive of each other and driven by a sense of community care. For me this is one of the most important aspects of a feminist understanding of safety and resilience. I am convinced that on-the-ground community support is the most valuable capacity that any grassroots groups could have.

In general, I love how they bring feminism wherever they go – libraries, museums, business projects, media interviews, etc. Working with them over the course of two days, I saw that their main strength is their collective spirit and commitment to the cause. Moreover, they bring their own unique experiences to their activist work which makes it compelling for their audience. FRIDA’s contribution in supporting small emerging local groups like I Am Freedom is a significant action in the cause of strengthening the global feminist movement. When young feminists connect or meet each other in-person, they realize they are not alone. Fem sisters are everywhere, and we won’t stop until we build the world that we are safe and happy to be in!

We are no longer accepting applications for the following posts. Thank you for considering! FRIDA…

It is almost mid-January already and we are in 2017! Yes, time is flying and…