As technology advances, so does our organizing

As technology advances, so does our organizing. In our digital age dominated by social media and its changing trends, mobilising people and making them aware of their rights and responsibilities is a lot different today than how it was even a decade ago. For instance, did you know about a young feminist group in Mongolia who have designed and developed a free mobile app to prevent child sexual abuse?

Beautiful Hearts Against Sexual Violence is a member-based non-government organization based in Ulaanbaatar, Mongolia, that consists of individuals from diverse backgrounds with the shared vision of ending child and girl sexual violence in Mongolia. They became a grantee partner in 2017 and used the support received from FRIDA to create a mobile based app to address the acute problem of gender based violence faced by underage children and young adults.

Called “Strong Girls Strong Nation”, this is an application designed for children from 3+ ages until 18+. It is free to download for both iOS and Android users. The content covers incest, sexual assault, sexual harassment and sexual violence at different locations, including home, public place, school, and workplace. At all stages of creating and developing the app, Beautiful Hearts engaged with over 30 young girls and women under the age 30. All ideas, creations, themes, designs and content of the app was directed by girls and young women.

Hands combined to denote the name of the app, that was designed, developed and conceptualised by young girls. The app is named Strong Girls Strong Nation.

The impact seen because of this app’s usage has been phenomenal to witness. Over 1000 people have downloaded the app and over 10,000 people have learned about it through social media since its launch in May 2017. Here is a short video that educates girls, teenagers and young women in preventing sexual abuse, cyberbullying and more. [Mongolian only]

Using this app in more workshops, Beautiful Hearts have been working to make sure participants receive clear messages about eliminating sexual violence and victim-blaming culture. “Some school administration and parents requested us to conduct training regularly. During the training program we built networking between school administration and universities in Ulaanbaatar city and target provinces. We are delighted that parents and teachers are using our mobile app to take quizzes and know their children awareness about sexual violence,” they say. 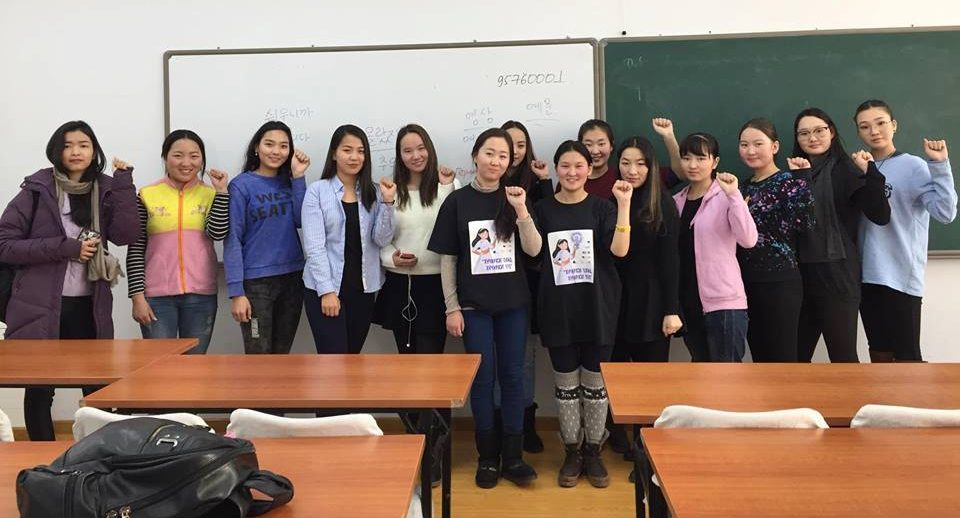 A discussion on Strong Girls Strong Nation app that was organized among female students of The National University of Mongolia.

Young feminist groups like Beautiful Hearts are leading the revolution in ways that make the most sense to them. They are using a rights-based approaches and creativity to tackle inequality andchallenge traditional mindsets to make the world more safe and secure. Support initiatives like these that are taking matters into their own hands.

To some groups, FRIDA funding is what pays their bills. To some others, it is what breathes life into a long, pending project. But to every single young feminist group, money is what they seek to continue their activism, uninterrupted. If you’ve donated before, consider making a recurring donation to FRIDA to double your impact. If you’ve never donated before, let this story from Mongolia inspire you today to give to FRIDA’s fierce youngfems.

By: Ani Hao and Ledys Sanjuan Meija Today, the media, traditional or not, is the…

Today is the International Day of the Girl, an international observance day declared by the…

From personal to political Purity Kagwiria, Executive Director of Akili Dada and founding advisor for…